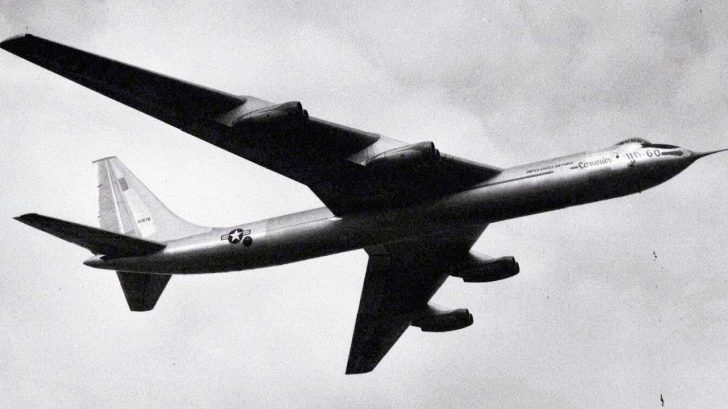 In March 1951, the US Air Force gave a contract to Convair to convert the older B-36Fs to the newer B-36Gs. After much planning and deliberation, the proposed aircraft was too different from the B-36 models. Even though it shared 72% of its parts with the B-36, the name was changed to the YB-60. The main differences were the YB-60’s pointed nose, needle-like instrument probe, and swept wings.

The YB-60 had a formidable rival in the form of the B-52. The “Stratofortress” and the YB-60 both had eight Pratt & Whitney engines but results from the test flights determined that the B-52 was 100mph faster than the YB-60. This severely hurt the chances of the YB-60 ever getting picked up by the Air Force.

Not admitting defeat, Convair proposed another prototype for consideration. However, there was no significant increase in performance though it heavily favored the addition of defensive armaments. Eight more M24A1 20mm autocannons were added to the plane which then increased the crew members needed for the aircraft from 5 to 9.

Convair still pushed for the usage of the prototypes for other uses such as test beds for turboprop engines, transformation into a commercial plane, or even a test vehicle for the X-6. Convair was rejected on all of their advances. The Air Force did not waste any time salvaging the YB-60 prototypes. Less than a month after accepting the prototypes, they salvaged the parts to be used for the B-36F program.