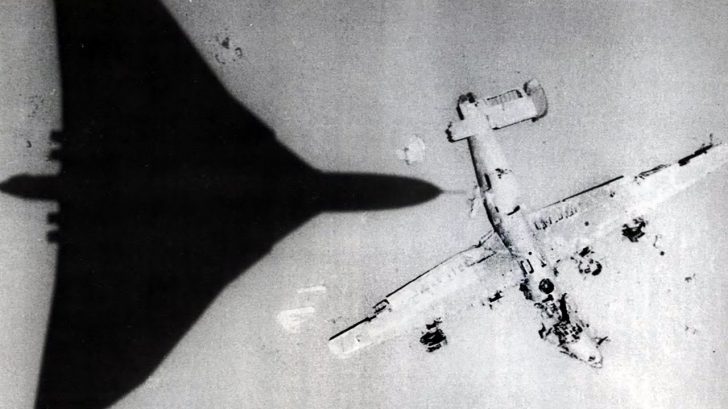 A new B-24D Liberator was assigned to the 514th Bomb Squadron of the Air Force in 1943. There, it was given the name, “Lady Be Good” – a reference to the musical, and was assigned a fresh new crew. The crew members arrived in Libya just weeks before they got their first mission together. Hays, the crew’s navigator, was also flying his first mission.

They were supposed to be one of the 25 B-24s to bomb the Naples harbor on April 4. Their B-24 was initially one of the 13 B-24s included in the second wave. There was a sandstorm that day that caused 8 B-24s to return. When Lady Be Good arrived, the visibility was too poor and they couldn’t pinpoint the main target.

Start Of The End

The plane flew alone back to Libya and when midnight struck, pilot William Hatton noticed that his automatic direction finder was not working. The crew failed to see their base and continued to go south into the Sahara Desert for two hours. When they ran out of fuel, the crew bailed out as the B-24 flew 16 more miles before landing on its belly.

8 of the 9 airmen safely landed using their parachutes. Lt. John Woravka, the bombardier, died due to a defunct parachute. The rest of the members met up using flares to signal their positions. After meeting up, they knew they had to find a way to get help fast. What they thought was the Mediterannean Sea turned out to be a desert.

The men quickly devised a plan to go north. With just a canteen of water to share, the 8 members survived for 8 days in the desert. 5 members waited behind after walking for 81 miles, while the other 3 pushed through.

Sgt. Shelley walked 20 miles before stopping, Sgt. Ripslinger walked another 27 miles before succumbing to the heat. Sgt. Moore’s body was never officially found, his body was likely buried under the sand.

On the other hand, the B-24 was in a passable condition. Further investigations showed that at the time of impact, one of its engines was still operational. They theorized that the plane might have gradually lost altitude and landed in the desert using its belly.

The B-24 still had its food supplies, a thermos of tea, functioning machine guns, and a functioning radio. If only the crew found the wreck, they could have had food and water while they used the radio to call for help.

According to official reports, the navigator of the B-24 thought he was flying from Naples to Benghazi. However, the plane’s direction finder couldn’t differentiate between a signal coming from behind or in front of the plane. Therefore, the navigator took the reciprocal reading off the back of the radio directional loop antenna. The pilot flew into the desert, thinking they were still over the Mediterranean Sea.

This freak accident gave way to various theories and ghost stories in the Air Force. After all, it did take almost two decades to finally figure out what happened to the B-24 and its crew members. Still, incidents like this were indirectly referenced in pop culture. The most notable was the similarities it had with the film, “The Flight of the Phoenix”, and a Twilight Zone episode called “King Nine Will Not Return”.