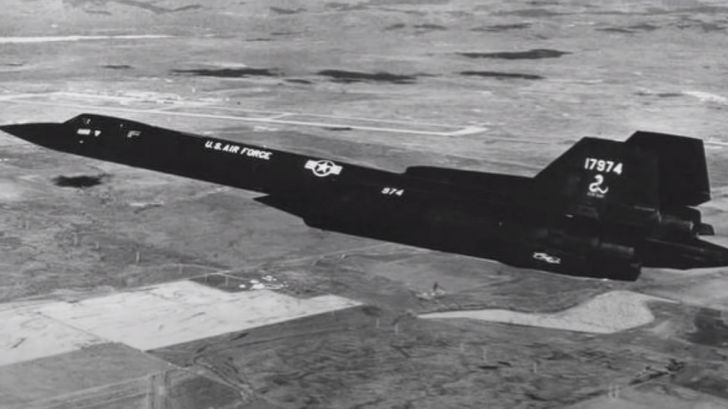 YouTube / The History Guy: History Deserves to Be Remembered

On January 25, 1966, Lockheed flight test specialist Jim Zwayer and pilot Bill Weaver were tasked to operate the SR-71. The two were to evaluate the Blackbird’s systems and procedures designed to reduce trim drag and improve high-Mach cruise performance. To achieve this, the Center-of-Gravity (CG) would be placed further aft than usual, reducing the SR-71’s longitudinal stability. Their mission started at 11:20 AM when the two took off from Edwards Air Force Base. After refueling from a KC-135, Weaver accelerated to Mach 3.2, climbed to 78,000ft, and turned eastbound.

Right after entering a programmed 35-degree bank turn to the right, the engine experienced an “inlet unstart.” This phenomenon happens when a disturbance inside the inlet results in a shock wave getting expelled forward. In turn, the affected engine loses its thrust instantaneously. These incidents were not uncommon to the SR-71 then, but in normal circumstances, the system could recapture the shock wave and restore it to its regular operation. In Weaver’s case, the right J-58 engine inlet malfunctioned, forcing the aircraft to roll further right and pitch up. He tried to recover by jamming the stick as far left and forward as it would go, but the plane did not respond.

In the middle of the incident, Weaver tried to inform Jim Zwayer about what was happening. His initial plan was to stay inside the aircraft until they reached a lower speed and altitude. After all, bailing out at Mach 3.18 at 78,000ft of altitude was nearly impossible to survive. However, the g-forces were building up rapidly until he eventually blacked out. Suddenly, the SR-71 was disintegrating around the two as they both lost consciousness. The whole event only took two to three seconds to unfold.

Saved By The Pressure Suit

Weaver regained his bearings while he was freefalling from 78,000ft. The emergency oxygen tank in the seat kit connected to the harness provided oxygen and inflated his suit at the same time. The inflated suit prevented his blood from boiling and offered protection from extreme buffeting and g-forces. In addition, the stabilizing chute was somehow released and did its job to make Weaver fall vertically rather than tumble. Again, Weaver catches a break when his main parachute is automatically deployed at around 15,000ft. Bill recalls seeing Zwayer falling not far from him, with his own parachute deployed.

Rescued By A Ranch Owner

Albert Mitchell, an owner of a huge cattle ranch and two helicopters, came to help Bill as soon as he landed. Luckily, Mitchell had a helicopter warmed up to take Bill to Tucumcari Hospital, 60 miles south. Unfortunately, Jim Zwayer was not a part of the ride. Zwayer’s neck snapped when the aircraft disintegrated, killing him instantly. Due to their perilous flight, testing at a CG aft of normal limits was discontinued, and issues regarding the plane’s trim-drag were resolved. To prevent another inlet unstart from happening, the inlet control system underwent continuous improvements along with the plane’s Digital Automatic Flight System.