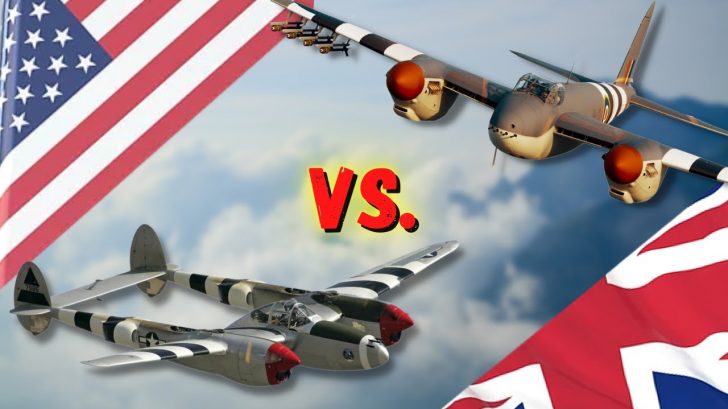 Have you ever wondered which aircraft between the two iconic planes you’d rather fight in during WWII? Then here are ten categories to guide you in our decision:

By the time the P-38s entered service, it was one of America’s most heavily armed single-seat fighters. Still, the Mosquitos had the upper hand, boasting two more 20mm Hispano M2s than the Lightning.

The P-38 can be fitted with up to 4,000lbs of bombs. However, a bomber variant of the Mosquito could also carry a 4,000lb Blockbuster bomb called “Cookie.”

P-38s could reach a maximum range of 2,600 miles with drop tanks but only had a combat range of 450 miles. As for the Mosquitos, some variants that carried drop tanks could comfortably reach 1,500 miles.

Mosquitos had limited visibility during landings due to the nose and landing gear configuration. Meanwhile, the P-38 had tricycle landing gears which offered better visibility and are now common in modern aircraft.

Flying a P-38 under 300 mph and at a lower altitude was a death sentence. In comparison, the Mosquito ended the war with the lowest losses of any aircraft under the RAF Bomber Service.

Mosquitos were not known for their day fighter performance against single-engine Japanese and German fighters. On the other hand, P-38s performed better during the daytime with faster acceleration and climb rate.

Lightnings were plagued with a high rate of engine failure. It got so bad that the commander of the 8th Air Force pulled it out of Europe. The same cannot be said about the Mosquitos.

The Mosquito was used in almost every role available, being one of the most versatile aircraft built during WWII. Nevertheless, P-38s were excellent fighters and fighter bombers. The latter even had a racing career after the war.