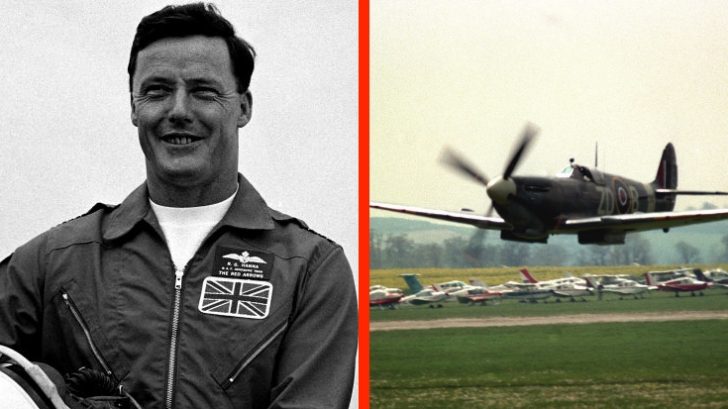 Ray Hanna was a legend in aviation and his legacy still stands the test of time. Any who ever saw Ray flying knows that was the best Spitfire pilot around. But even his biggest fans might not know about some of these facts about Ray Hanna.

Most people know of Ray Hanna as a stuntman, but fewer know him from his film work. He formed a close friendship with Steven Speilberg and flew fighters in films such as Empire of the Sun and Saving Private Ryan to ensure historical accuracy.

Mark Hanna followed in the footsteps of his father, becoming a stellar pilot and working with the Old Flying Machine Company. Together they flew professionally in everything from airshows, films and consultant work. Sadly in 1999, Mark Hanna lost his life after crashing in a restored Me 109. Ray Hanna was devasted by the loss of his son but vowed to keep bringing his love of aviation to the world.

Ray Hanna was actually a founding member of Royal Air Force’s Red Arrows. Designated as Red 3 when he joined, but within a year became the team’s leader as Red 1. Ray and the Red Arrows performed stellar airshows all over the world and became fan favorites. He was responsible for the expansion of the Red Arrows to nine members allowing them to perform their iconic diamond formation.

2. Not Just A Spitfire Pilot

Although Ray Hanna was arguably the best Spitfire pilot around, he did operate a wide variety of aircraft. He learned to fly in New Zealand operating a Tiger Moth but went on to join the Royal Air Force. There also began to operate early jet-powered aircraft such as the Gloster Meteor, the DH Vampire. However, Ray held a place in his heart for WWII-era aircraft such as the P-40 Kittyhawk, the Hawker Tempest, Bristol Beaufighter and of course, the Supermarine Spitfire.

Ray Hanna’s most iconic stunt was flying a Spitfire under Winston Bridge on the River Tees. Many people know of the daring feat, but not many people know its true purpose. The bridge stunt was a scene created for a program called Piece of Cake about RAF pilots during World War II. RAF pilots performed this kind of stunt in France during the early days of the war. This particular scene actually went on to become more popular than the program where it originated.

There will never be another pilot quite like Ray Hanna. He brought such passion and intensity to his flight that no one could deny. This film from the Old Flying Machine Company demonstrates just how amazing he was.