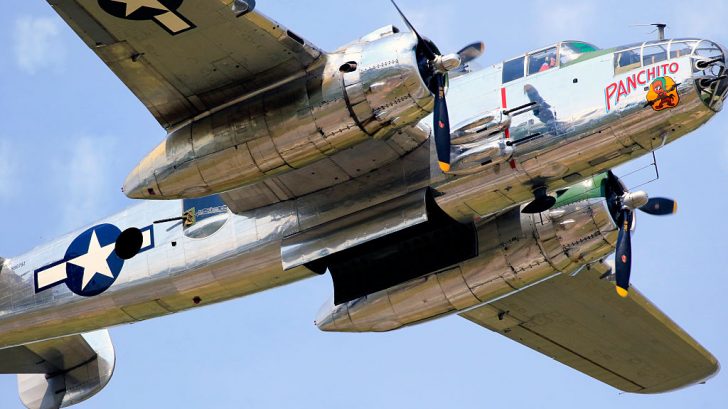 The North American B-25 Mitchell is an American twin-engine, medium bomber designed and produced by the North American Aviation (NAA). The aircraft is named in honor of Major General William “Billy” Mitchell, making the B-25 the only US military aircraft named after a specific person.

Although used in all theaters of the war, the B-25 saw the most action in the Mediterranean and Pacific. But what made the B-25 Mitchell such a darling of the Allied forces and the scourge of the Japanese?

Here are eight reasons why the B-25 Mitchell was the best medium bomber of World War II:


The B-25 Mitchell was equipped with various weapons throughout the war. At one point, it became the world’s most heavily armed aircraft. Its average bomb capacity was at 5,000 lbs (2268 kg.) Some variants featured a 75mm cannon or a 14 forward-firing gun arrangement.

The B-25 Mitchell was also known to be a sturdy aircraft, capable of enduring heavy punishment from the enemy. One notable aircraft is ‘Patches’ of the 321st Bomb Group, which completed 300 missions, belly-landed six times, and had 400 holes patched.

Although primarily designed as a medium bomber, the B-25 Mitchell proved capable of performing other roles. It served for reconnaissance, transport, anti-submarine, ground attack, gunship, and even as a fighter. About 9,800 B-25s were produced during the war.

The B-25 was a safe, forgiving, and easy aircraft to fly, a characteristic that was loved by many pilots. It can remain airborne and maneuverable even with one of its engines out.

Unlike many planes, the B-25 can take-off from primitive field conditions, a  significant characteristic in the Southwest Pacific. It can also take-off from aircraft carriers, an unprecedented feat by medium bombers at that time.

On April 18, 1942, Lt. Col. James H. Doolittle led 16 B-25s into the historic bombing raid on Tokyo, bringing the war into Japanese soil for the first time. Although the bombing raids did not cause much physical damage, it revived the dying morale of the military and civilians. Much more importantly, it shocked the Japanese populace and forced military officials into making fatal decisions.

Another significant contribution of the B-25 was in the Southwest Pacific. The 5th Air Force launched devastating skip-bomb attacks on Japanese shipping, starving the enemy’s forces of vital resources. Some variants of the B-25 had eight machine guns mounted on its solid nose and was effectively used for strafing.

The B-25 was easy to manufacture and repair. It was easy to fly and was more than capable of completing the tasks assigned to it. No other twin-engined bomber saw greater production during the war. The B-25 continued its service after the war as a trainer, reconnaissance, and other support roles.