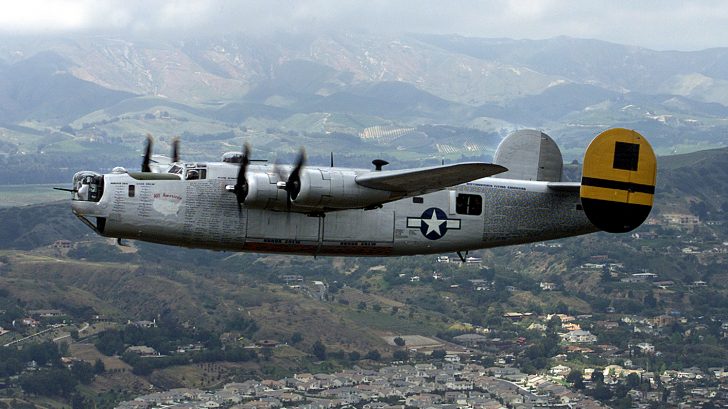 A B?24 Liberator flies over Ventura County on it's way to Camarillo Airport. A WWII era B?17 Flying Fortress and B?24 Liberator arrived in Camarillo Airport today. Tours of the historical bombers will be offered Tuesday 9:00am until 6:30pm and Wednesday 9:00am til 1:00pm when they depart. Donations of $8. for adults and $4. for children are requested. Digital image taken on 04/23/2003. Photo by ^^^ (Photo by Stephen Osman/Los Angeles Times via Getty Images)

The Consolidated B-24 Liberator is one of the most famous heavy bombers of World War II. Alongside the B-29 Superfortress and the B-17 Flying Fortress, the Liberator gained a distinguished war record during its service in the European, Pacific, African, and Middle Eastern theaters. The B-24’s longer range and higher bomb load capacity helped bring the Axis forces down to their knees.

However, despite being the most produced American wartime aircraft, the Liberator was not as popular as its contemporaries. The media and many airmen preferred the B-17 Flying Fortress, which was supposedly inferior to the B-24. So, what made this destructive heavy bomber deserve an ugly duckling reputation?

Ironically, the attribute that gives the Liberator its strength is also its greatest weakness. The aircraft’s shoulder-mounted high aspect ratio Davis wing gave it a high cruise speed, heavy bomb load, and a legendary range. However, there was a tradeoff. The B-24’s wing suffered a greater wing load compared to the B-17, and could not endure combat damage as much.

Flak was the bane of the Liberators. Having a lower service ceiling compared to the B-17s meant that the Liberators were more likely to be targeted by flak. With the increasing efficiency of the Germans and rapid development in radar systems, more and more Liberators were shot down from the skies.

The B-24 had poor flying characteristics and was very hard to maneuver. Many pilots found it difficult to keep flying formations intact. Due to this, Liberators became the preferred targets of German fighters. Fortunately, escort fighters were later introduced to protect the slower heavy bombers from enemy fighter aircraft.

Despite these flaws, the B-24 Liberator’s impact on the war cannot be dismissed. Without the Liberator, the war could have gone a little differently. It was not a perfect aircraft, but it certainly did what it was made to do.