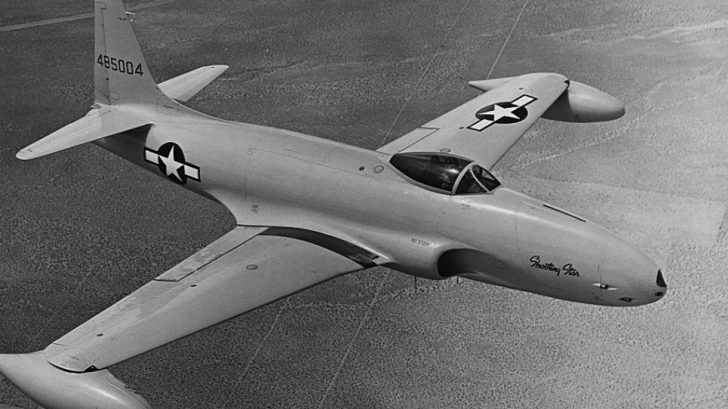 5. The Project Was Incredibly Secretive

Of the 130 people working on Lockheed P-80 Shooting Star, only 5 knew the details. It was so secret that the British engineer who brought the Goblin engine that was meant to power the P-80 was detained by police because Lockheed officials could not vouch for him.

Ironically, the super secretive project came to life beneath a circus tent. The Lockheed aircraft factory under Clarence “Kelly” Johnson was running at capacity. To compensate, Johnson found a shack by the wind tunnel and constructed around that. They bought out a local machine shop for tools, built walls from packing crates, and rented the big top from a local circus. They named the site the “Skunk Works,” after the moonshine still in the “Lil’ Abner” cartoon.

3. It Changed How We Looked At Speed

The project defined fast. Given only 150 days to create the P-80, workers labored 10 hours a day, 6 days a week to complete it in 143 days. They finished 7 days early.

On January 27, 1946, Colonel William H. Council flew the first transcontinental jet flight. The 2,457 miles between Long Beach and  and New York took 4 hours and 13 minutes and 26 seconds, setting a new record. His average speed was 584mph.

Though the P-80 was too late on the scene to see combat during WWII, the P-80 did still serve in the war. Two American pre-production Lockheed YP-80A Shooting Star jets served in Italy with the USAAF for reconnaissance purposes in February and March 1945. It would later play a crucial rule in the Korean War.

Testing the P-80 proved to be extremely dangerous. In fact, the P-80 was a test pilot killer. Its victims include Richard Bong, the United States’ top ace. Another test pilot had been killed just 3 days before. Jet aircraft was simply a different beast with an incredible leap in speed capabilities and entirely new concepts to consider. 23 military jets crashed between 1945 to 1950, killing 36.