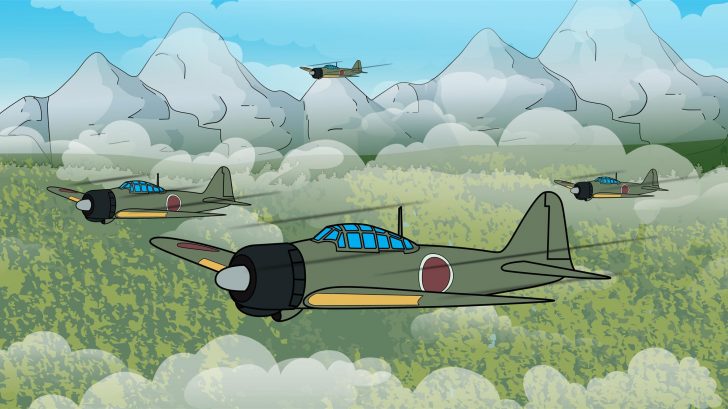 The Zero was a menacing war machine that toyed and destroyed the clunky Allied fighters on the onset of the Second World War.

The Zeke’s unbeatable maneuverability and blazing speed were undoubtedly big factors in the swift destruction of Pearl Harbor.  One year after the attack, the USAAF issued in  Intelligence Summary No. 85, which concluded that the Zero is superior to the present service type. The most salient part of the report?

“Never attempt to dog fight with the Zero,” and “The Airplanes be used against the Zero be as light as possible and that all equipment necessary for combat be removed.”

But just as it roared with invincibility at the start of the war, it was felled by its own strengths when the war was nearing its end. The Americans have acted wisely and developed the loaded P-38 and F4U. Not long after it was brought down from its aerial supremacy, it was used as the vessel that came to symbolize the Kamikaze – the Japanese way of ultimate sacrifice.

Nonetheless, the Zero was a legendary aircraft that won a following even in the Allied forces. But legends are inevitably abundant with myths, and this mighty Japanese engineering marvel was no exception.

Here are the most common misconceptions about the Zero.

MYTH #1:  A6M Was More Technologically Superior Than The Other Fighter Aircraft During the Early Years of the War

The Sakae radial engine was weaker compared to the engines of its contemporaries, but the Zero made up for it with its lightweight frame, unmatched range, and efficiency at high speeds.

After they lost the Battle of Midway, Japan responded by upgrading the powerplant to a supercharged Sakae 14 cylinder air-cooled radial engine that runs on 1,130 hp, resulting to increased speed at the expense of turn radius.

In contrast, the larger Grumman Hellcat carried a 2,200-hp Pratt and Whitney engine with a two-speed, two-stage turbocharger which is similar to the P-51’s powerplant.

However, the Zero still lacked the most important upgrades which eventually exposed its greatest weaknesses, which will be discussed in a little while.

MYTH #2: The heavier and slower American Fighters stood no chance against the extraordinarily agile Zeros.

Sure, the Zero reigned the skies during the earlier days of the war, dominating the likes of the P-40 and the Hawker Hurricane, but the introduction of the Grumman Hellcat and the Lockheed P-38 completely relegated it to an aircraft that’s built more for aerial acrobatics than for actual battle.

Plus, the Americans quickly figured out that keeping up with the Zero was a futile exercise. Instead,

MYTH #3: The Zeros flew in flawless three-fighter flights which proved effective in the attack on Pearl Harbor. That must mean they used state-of-the-art radio communication to effectively execute their tactics.

Yes, the Japanese aerial missions usually flew in three-fighter flights called shotai – a tactic where the two wingmen would constantly weave behind a flight leader who is miles ahead of them.

But they coordinated their tactics with hand signals. The zealous pursuit for the ultimate lightweight fighter led to the removal of the Zero’s radios. This proved to be a grave trade-off, as the pilots were unable to communicate incoming attacks.

MYTH #4: The Zero was a feared gunslinging aerial destroyer armed with the most powerful armament.

The Zero’s armament was basic at best. It was armed with two 7.7mm machine guns and two 20mm cannon. It could also carry two 130-pound bombs.

MYTH #5: The Zero’s biggest weaknesses were the absence of an armor plate and self-sealing fuel-tank.

The lack of armor and self-sealing tank horribly made the pilot vulnerable, but they weren’t the Zero’s weaknesses.

It was  the lost of more than ten percent of Japanese experienced pilots following the Battle of Midway.

Because Japan had anticipated a short war, it only trained hundreds of pilots at a time. Thus, there was a massive recall of veteran pilots to train the rookie pilots back in the homeland. This, coupled with the long attrition in the Pacific Theater, stretched Japan’s manpower and limited resources.