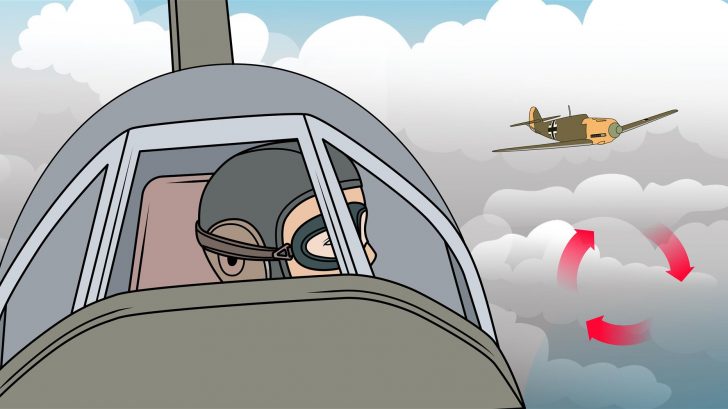 November 2nd, 1944, 16 P-51 Mustangs from the Blue-nosed Bastards of Bodney fly deep inside enemy territory. They are on their way to escort a B-17 bomber headed to destroy a Nazi oil refinery. However, before reaching their main objective, the small group of Mustangs spots a massive formation of 50 ME-109 German fighters below them.

With the element of surprise on their side, Captain Donald S. Bryan and 8 of his squadron mates decide to engage the Germans despite the 3-1 odds. Surprisingly undetected, they position themselves behind the German fighters and prepare for an all-out attack. Now with the enemy planes directly in front of them, Captain Donald fires his .50 caliber machine guns and easily singles out a German fighter. Caught off guard, the Germans break formation and scatter. Chaos ensues.

Although terribly outnumbered, the P-51s outperformed the enemies with its innovative design. They were considerably faster, turned slightly better, and had a greater range and service ceiling. Moreover, the controls were easily accessible to the pilots. With this advantage, Captain Donald skillfully maneuvers within the swarm of warbirds and destroys a number of enemy planes.

Suddenly, Captain Donald notices a 109 slowly emerge from his six. He twists and turns in an attempt to shake off the enemy plane, but the 109 skillfully follows. Captain Donald then tries to dive away, but the 109 steadily kept trail once again. He could not believe it. He is being outperformed. Inch by inch, the 109’s machine gun got closer to his aircraft.

The Crazy Move He Pulled Off

Desperate and having not much time, Captain Donald decides to pull a death-defying move that he called the “Inverted Vertical Renversement”.

He had only practiced this maneuver a couple of times, but he had no other choice. Before the enemy 109 could squeeze his trigger, Captain Donald snaps the stick to his gut and hits full bottom rudder. This caused his P-51 to stall and face downwards, incredibly spinning the plane counterclockwise with the help of the propeller’s torque. He pushes the stick full forward again, making the plane accelerate to the opposite direction of the 109. In a matter of seconds, the enemy flew right past him and he was out of sight.

Despite having a brush with death, Captain Donald returns to battle and destroys a few more planes until he ran out of ammunition. Out of the 38 ME-109s claimed by the Mustangs that day, Captain Donald Bryan accounted for 5 kills.