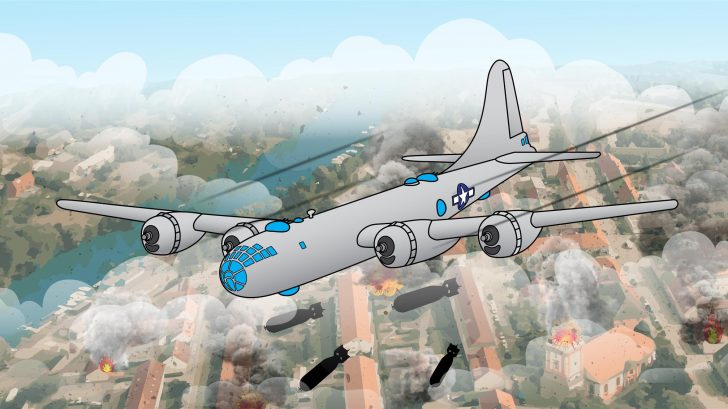 Just 3 days after the B-29 Enola Gay dropped the Little Boy over Hiroshima, the Bockscar followed suit and unleashed the more powerful Fat Man that killed 35,000 people. The atomic bombings are still widely believed to be World War II’s final blow.

However, the Japanese were only keen to offer a conditional surrender. Without any negotiations having been conducted, the Twentieth Air Force launched the final B-29 bombing missions on August 14, 1945.

1,014 Bombers sent out to bombard Japan’s other key cities.

The Allied forces hit mainland Japan with the largest air raid in the Pacific Theater.

On the night of Japan’s surrender, the USAAF 315 Bombardment Wing deployed 314 B-29 Superfortresses to raid the city- a mission famously known as the Tsuchizaki Air Raid.

It was the longest-range mission of the war.

The 315 Bombardment Wing was based in Guam. The B-29 Superfortresses assigned to destroy the Akita Oil Refineries were stripped off their main armaments to save weight and to extend their range.

The mission flew 3,800 miles and 17 hours before the Wing returned to Guam. Moreover, not a single Superfortress was destroyed, as the highly-demoralized Imperial Army couldn’t mount any resistance against the Allied bombing mission.

Just five months ago, the Army Air Forces launched the first of many B-29 mining operations against Japan, when it deployed 100 Superfortresses to obliterate the crucial Shimonoseki Strait supply line that connected the major islands of Honshu and Kyushu.

Surprise: The Soviets Played A Greater Role In Japan’s Surrender Than The Atomic Bombs did.

According to the historian Tsuyoshi Hasegawa, the Soviet tanks were the more menacing threat than the atomic bombings.

On August 5 – a day before the Hiroshima bombing – the Soviet Union unilaterally abrogated its neutrality pact and launched the Manchurian Strategic Offensive Operation and followed it up with the Declaration of War.

Emperor Hirohito’s declaration never mentioned the Soviet offensive as a factor in Japan’s surrender, but Hasegawa maintained that the Soviets directly induced the surrender because it “effectively dashed any hope that Japan could terminate the war through Moscow’s mediation.”