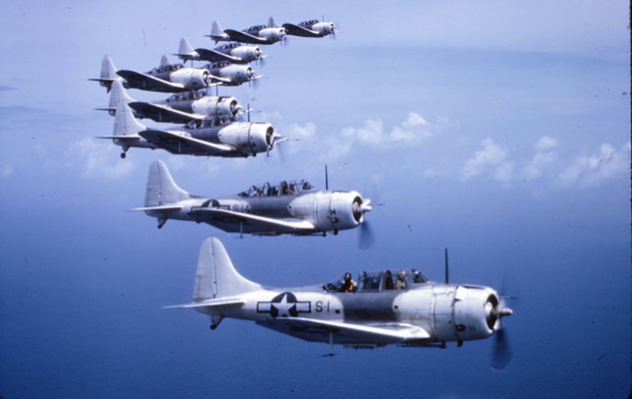 The Douglas SBD Dauntless embodied the grit and tactical mastery that defined the Battle of Midway.

The Battle of Midway in June 1942 was one of the greatest victories of the Allied Forces. It effectively kept the Japanese Imperial Army from pursuing their invasion of the Pacific and placed them on the defensive for the rest of the war.

In a span of five minutes, the bombers dropped 9 bombs and sank Kaga. The Bombers From USS Yorktown followed and destroyed the Soryu. Then the Akagi. The last fleet carrier went down at 17:01.

This battle was undoubtedly the Douglas SBD’s moment of glory and the Battle of Midway cannot be mentioned without the Dauntless being uttered in the same breath.

Here’s why this aircraft from the Douglas Aircraft Corporation is an extraordinary and unrivaled feat of military engineering.

1. The SBD had a long range, making it an exceptional naval scout plane.

The Dauntless is primarily a dive bomber, yet its 1,000 hp Wright Cyclone Engine, light construction, and a max range of 1,458 miles made it perfect for scouting missions. For reference, the A6M Zero’s operational range was 1,160 miles. while the Wildcat clocked in at 754 miles.

Case in Point: Wade McClusky’s discovery of the Imperial Army’s fleet carriers despite running on dangerously low fuel. Faced with a dilemma between turning his squadron around for a long flight back to the Enterprise, or proceed with his scouting mission which could put his squadron at the risk of being swallowed by the ocean, he chose the latter and wound up changing the course of the war.

Forgotten hero? Not anymore. WWII hero C. Wade McClusky is recognized for his impact on the Battle of Midway. @WGRZ pic.twitter.com/iUBTcT4Num

2. It has an enormous Bomb Load Capacity

The Douglas Bomber can hold 1,600 pounds of fuselage bomb and two 325-pound wing bombs. Its enormous capacity unquestionably made it one of America’s most formidable weapons in the Pacific Theater, having sunk the biggest tonnage of Japanese naval ships among all other aircraft.

Simply put, its part in the Battles of the Coral Sea and Midway couldn’t be emphasized enough.

3. The Dauntless deviated from the more accurate method of dropping bombs – yet it helped win the Pacific

In the Battle of Coral Sea, the SBD opted for a simpler technique: It bombed from a shallow dive angle, instead of the normal bombing angle of 45 to 90 degrees.  This technique is called glide bombing.

4. Its ability to absorb damage turned it into the aircraft with the lowest attrition rate.

Because of its durability, the Dauntless eventually ended its military service in 1944 flying off escort carriers on antisubmarine missions.

5. It was so highly regarded that its pilots affectionately called it by many nicknames.

Some of the most memorable nicknames designated to the Dauntless are Barge, Clunk, Speedy-3, Speedy-D, Banshee, and Slow But Deadly – the last one being a reference to its maximum recorded speed of 255 miles per hour.

Here’s a quick video that shows the Dauntless in its full dive-bombing glory.