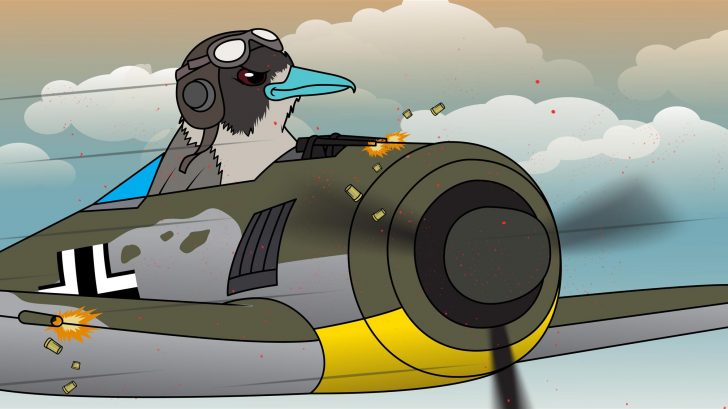 This Underappreciated Fighter was a Bomber, Support Aircraft, Reconnaissance Plane, and Night Fighter All Rolled Into One Deadly Machine.

The Focke Wulf W-190 – together with the Messerschmitt Bf 109 – are inarguably the two German Warbirds that made the Luftwaffe Fighter Force a menacing presence in the skies during the war. The untested war capabilities of its radial engines at the time prompted many aeronautical engineers to view the FW-190 with much skepticism, but the Focke-Wulf immediately set for the skies and gave Germany the highest number of aerial kills among the other aircraft in its fleet.

In fact, many Allied pilots were so impressed that they had compared the Wulf to the legendary P-51 Mustang, citing its exceptional maneuverability, responsiveness, and unmatched proficiency in ground attacks. Here are the reasons why the FW-190 has become rightfully known as the Butcher Bird of the Second World War.

In 1941, the Fw 190 introduced itself to the world to provide cover to the English Channel traverse of the battlecruisers Scharnhorst and Gneisenau. This coming-out party shocked the Allies because the more technologically advanced Wulf easily outclassed, outpaced, and outmaneuvered everyone’s all-time favorite fighter – the Supermarine Spitfire.

Its unmatched low-flying ground attacks and its bomb-bearing capabilities made the Fw 190 Germany’s weapon in numerous raids on convoys and tanks.

2. That Radical Radial Engine We Were Just Talking About

The Focke Wulf set itself apart from the competition with its innovative radial engine. Widely viewed to be an inefficient engine that caused excessive drag, designer and pilot Kurt Tank embraced this apparent flaw and installed the BMW 801 engine in the Focke Wulf – a huge gamble at the time.

It turned out that Tank was not gambling: the Focke-Wulf boasted the war’s first engine control unit known as the Kommandogerat.  Unlike the mechanically complex and gear-driven Daimler-Benz DB 601 engine of the Messerschmitt, the 801 used a unit that adjusted supercharger settings and ignition timing with just a single lever switch. This big advancement simplified engine control and preserved the engine as a result.

The FW-190’s air-cooled engine and wide-track withstood the harsh conditions of war better than the liquid-cooled engine of its counterparts.

3. The Sturmgruppe Tactic is as Scary as it Sounds

The Fw 190 A-8 variant presented a dilemma to the Luftwaffe: If it would match with bombers by increasing the Focke Wulf’s already heavy armory and firepower, then it would struggle mightily against the Allied dogfight aces. If it were to decrease the armor, it will be easily struck down by bombers.

The Solution? A formation consisting of a mass of FW-190’s escorted by the Bf 109’s which came to be known as the Sturmgruppe. The formation emphasized diversion, diving attacks, and rear attacks.

Although the Allies quickly adjusted, the Sturmgruppe tactic inflicted huge losses on the Allied front while it lasted.

4. A True Workhorse, it served on ALL of Germany’s War Fronts.

As examples, the Gruppe ZG 2  dominated the North African Front with their fleet of Fw 190’s and obliterated Allied strategic points during the Tunisian campaigns of 1942 and 1943.

On the Western Front,  Luftwaffe’s flying scourge saw extensive action in Operation Cerberus, where it outclassed the Spitfires of the 42nd Squadron and aided the German Navy’s successful dash through the English Channel.

5.  The Focke Wulf’s reputation was exemplified by this Top-Scoring Ace Pilot.

Otto Kittel was a distinguished German Ace who flew 538 missions and recorded 267 aerial victories, making him the fourth highest scoring ace in the history of aerial combat.

He scored 228 of those victories with the Focke Wulf 190.