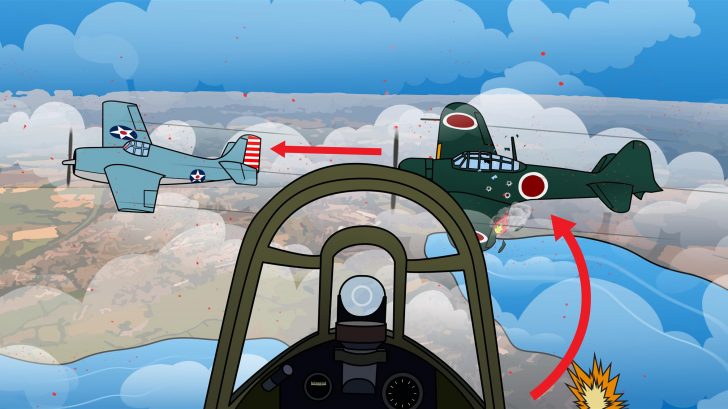 Also called the Beam Defense Position, we take a look at the  aerial tactic that prevented the Japanese from “making any attack without seeing the nose of the American planes pointed at them.”

Who thought that matchsticks would play a huge role in devising a tactic to neutralize the A6M Zero’s unprecedented speed and maneuverability?

He worked with matchsticks to demonstrate the possibility of a pair of fighter aircraft repeatedly head toward each other, cross paths, and in a swift surprise move, trap an enemy craft to its doom.

It was essentially a deadly three-step technique of Bait-Hook-and-Kill.

Thach implemented his tactic in the tide-swinging Battle of Midway n the Pacific. After defeating the Japanese fleet, the adoption of the maneuver as a standard operating procedure throughout the war was a no-brainer.

Bait-Hook-and-Kill. The tactic sounds simple, but in reality, it requires extraordinary patience and timing to execute. Today, we show you how the Thach Weave works in this simple three-step guide

One Wildcat acted as the “Bait”, and the other acts as the “Hook.” For purposes of this discussion, we will call the first as the Bait Wildcat  and the other, the Hook Wildcat.

The Bait Wildcat is parallel to the Hook.

The Bait deliberately allows the Zero to tail it and receive its rapid fire.

The Bait then anticipates his partner, the Hook, and head toward each other.

The Wildcats meet and get past each other, forming the First Weave.

The Zero which tailed the bait is placed in an inescapable spot: It is now positioned directly between the Hook Wildcat’s crosshairs.

In the Battle of Midway, Thach – who acted as the Hook – executed his move by diving under his wingman’s Bait Wildcat and smoked the tailing Zero.

If the Zero had in some way dodged the Hook’s firepower, it would nonetheless dive for safety and regroup with his squadron – confounded by the unpleasant surprise he was greeted with.

Here’s An Animation Of The Move: