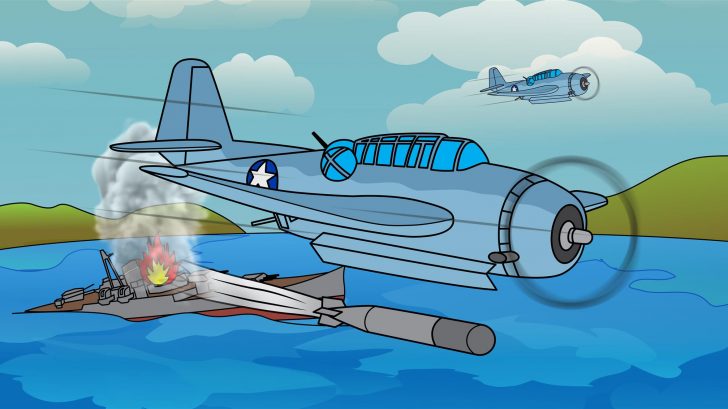 Upon its introduction in 1935, the TBD Devastator was widely considered the first modern torpedo bomber in the world. Then came the Avenger.

It was a huge departure from the traditional bomber design because it was the first monoplane with hydraulic folding wings, and it was the US Navy’s first all-metal aircraft.

But the Devastator’s name couldn’t be brought up without mentioning the most important American carriers during World War II, such as the Enterprise,  Yorktown, and the recently discovered Hornet. They all served in the Battle of Midway.

The statistics for the Devastators during this particular naval battle was gruesome: 37 out of the 41 deployed by the carriers failed to return. It was time for a new weapon. Enter the Grumman TBF/M Avenger.

1. The Battle of Midway was the “passing of the torch” moment for the TBF Avenger…..until it wasn’t.

As mentioned earlier, all but four of the Douglas Devastators in this mission were nearly wiped out. The six Avengers did not perform any better.

Of these six, only Ensign Alber Earnest’s TBF – although badly damaged and bare bones – was able to return from the brutal swarm of Zeros that met them.

The Japanese Submarine I-52 was an important cargo sub that carried critical materials that were meant to be exchanged with the Germans. The exchange was supposed to happen in a port in Lorient, France.

But the Allies had better plans.

The coordinates of the I-52 were intercepted, and a hunter group consisting of Avengers and  Wildcats swooped in and pursued the I-52. Lt.Cdr. Jesse Taylor and Flash Gordon piloted their Avengers and torpedoed the submarine.

It lay at the bottom of the ocean for over 50 years.

The 41st POTUS bailed out when his Avenger was shot down during a raid in Chichi Jima, Japan.

Before going down in the ocean, he was able to drop all of the four 500-bombs on the target, for which he was awarded the Distinguished Flying Cross.

4. The Avenger was the heaviest single-engine plane during World War 2.

5. The Reliable TBM Avengers served until 1962.

Its reputation as a sub-killer ended with the war. Its production officially ended in 1945, but it continued to serve the U.S. Navy as an electronic countermeasure and airborne radar communication.

It even served as  Anti-forest fire planes mainly because of its power, ruggedness, and range.