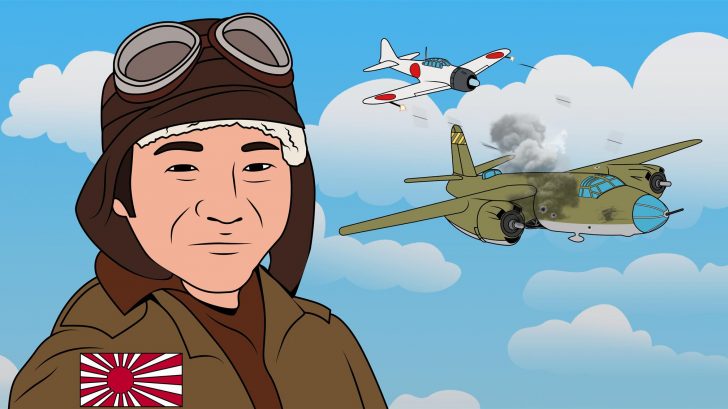 One Of The Best Japanese Pilots

Perhaps one of the most talented Japanese flying aces to have emerged during World War II was Sub-Lieutenant Saburō Sakai. He had claimed a total of 64 aerial victories, but his official record is only at 28. Despite flying an inferior aircraft, Saburō remained a threat to the Allies with his acrobatic and cunning strategies. One account says that Saburō once destroyed three enemy aircraft within 15 seconds. Of all his amazing feats in the sky, the events that took place on June 9th, 1942 stands out the most.

He Spots Lyndon B. Johnson

On his way to his 64th kill, Saburō encountered a formation of American medium bombers headed for Rabaul. What made this encounter interesting is that Reserve Lieutenant Commander Lyndon B. Johnson, USA’s soon-to-be president, was on one of the B-26 Marauders. In an interview, Saburō vividly recalls that day as follows:

“I attacked the B-26s. One, two, three planes. When they were coming towards me, I shot. My bullets hit one of the planes, and its bomb exploded. I flew black through the smoke. The Americans thought that we collided. I looked back. I attacked another plane, but there were clouds, and the plane that I attacked flew into the clouds together. That was the plane Lyndon Johnson was in. His plane had a lot of bullet holes but they managed to land. Each time I went to America, I was asked, why didn’t you shoot at Johnson’s plane first and not the other one? If I hit that plane, there would have been no President Johnson.”

After the war, Saburō Sakai became a Buddhist. He became friends with some of the pilots he had fought during the war, including Harold James, the man who almost shot him down and cost him the sight of his right eye.