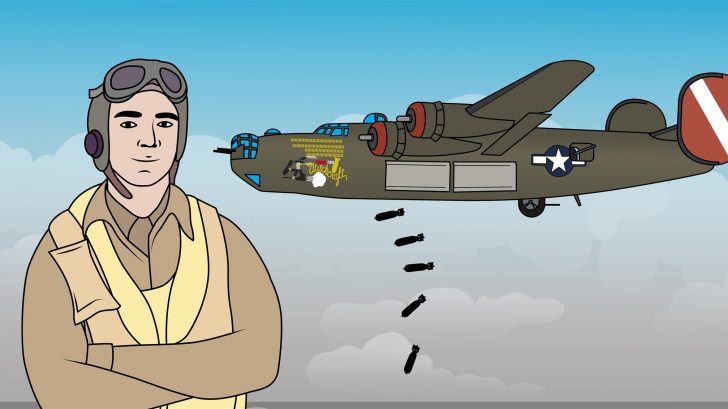 The B-24 was THE heavy bomber of the Pacific Theater.

Borne out of General Arnold’s ambitious vision for a four-engine bomber with a 3,000-mile range and a maximum altitude of 35,000 feet,  the Air Corps came up with a  beast that eventually earned the distinction as the most-produced four-engine aircraft in history, totaling 18,188.

The Liberator was the choice bomber against submarines in the Atlantic, but when 1944 rolled around,  the Liberator’s legend began in the Pacific theater, where 2,748 B-24D’s were deployed because of their unmatched range that’s estimated to be more than 2,100 miles. By the end of the year, there were more than 6,000 B-24’s in the Pacific.

Its massive size and attributes required vast technical knowledge from a crew of 10. So in 1945, The USAAF released a comprehensive training manual to operate one of its most important heavy bombers at the time. Here are the main takeaways that you can apply in your life:

1. The buck always stops with the commander.

The airplane commander is required to exercise flawless oversight over his crew at all times – whether the Liberator is in the midst of operation or when it is idle on the ground. As such, he is tasked to maintain its crew’s safety and efficiency, and to leverage the specialty and strengths of his men.

This brings us to the next one.

War is not just about winning and destroying the enemy. At its core, it is a life-altering event that has a profound impact on the men that take part in it.

Thus, the Commander has the duty not only to lead, but also to counsel his crew. He is required to know them personally: Where he lives, where he studied, where he worked, and what his interests are.

3. And when I mean “very well,” it means getting to know their habits too.

A crew’s business is essentially the Commander’s business. To command obedience and loyalty, he must be friendly but firm: To do this, he must have their interests in mind. This would ensure high morale at all times.

An army requires constant training. The CO must follow closely his crew’s development and track progress. To do this, he must undestand each man’s responsibilities and help him find ways to navigate the problems that come with it.

When a bomb misses its target, the bombardier is most likely to blame because he was the one who stalled the bombsight gyroscope, but as stated earlier: The buck always stops with his Commanding Officer.

Not questions that even lead to more confusion. As the commander, would your qualifications do justice to your miniature army? In case of emergency, can the co-pilot step up to the plate and perform acts beyond his call of duty?