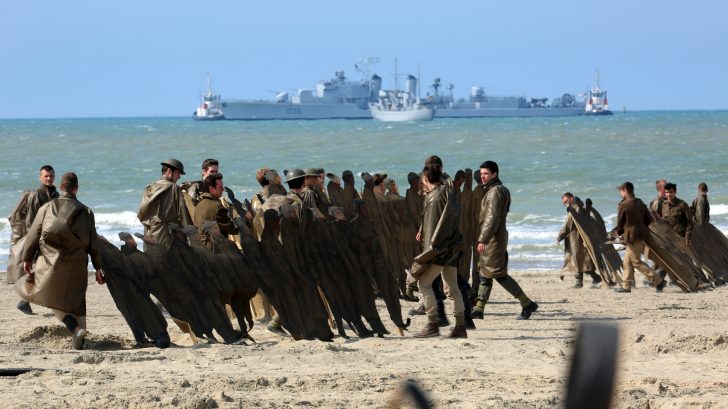 DUNKERQUE, FRANCE - MAY 26: As they shot scenes, a number of men held up cut-out soldier figurines which were placed behind them as if to give the impression of more figures than there actually were on the set of Christopher Nolan's 'Dunkirk' on May 26, 2016 in Dunkerque, France. (Photo by Sylvain Lefevre/Getty Images)

If you love watching movies depicting the tragic events of World War II, then you might have already seen Dunkirk. Directed by the renowned Christopher Nolan, the movie Dunkirk was praised and received well by critics and viewers alike. Based on the true story of Operation Dynamo, Nolan portrays the horrific events of the Dunkirk evacuation in 3 different perspectives. But, as many films based on real-life events, inaccuracies are bound to happen.

Here are five things wrong with the movie Dunkirk.

2. The Town of Dunkirk

The movie is mostly told in 3 different places: the sea, the air, and on the beach. Little is shown about the town of Dunkirk. However, at the rare times Dunkirk is shown, we see a mostly intact ghost town. The only traces of war seen are a few soldiers and some sandbags blocking the roads. This is historically inaccurate, as the town of Dunkirk was actually pummeled down into ruins by continuous aerial bombings and shellings from the incoming Germans. It took the residents of Dunkirk a few years to rebuild and restore everyday life to some degree of normalcy.

3. The Little Ships of Dunkirk

With the soldiers stuck on the Dunkirk beaches needing as much help as they could get, a large number of civilian sailors heroically sail their boats across the channel to aid in the evacuation. This was portrayed in the movie as a major turning point and was somewhat the main savior of the day. In truth, however, this was not the case. Majority of the surviving soldiers were rescued by the navy ships. Out of the 338,000 soldiers evacuated, 239,000 of them were taken off the mole by navy ships. Around 99,000 were saved and picked off from the beaches using lighter craft. Only around 6,000 were actually saved by the Little Ships of Dunkirk.

4. Farrier Runs Out of Fuel

In the movie, we are shown the brave airman named Farrier with his Supermarine Spitfire Mk I in intense dogfights. He had been on the air for an hour, and he is now desperately running out of fuel. Despite this, Farrier decides to keep his patrol over the beach until the very last second, leading him to land too far away from rescue. But would a real Spitfire run out of fuel too soon? Probably not. A Supermarine Spitfire Mk I could hold 85 gallons of fuel, which can be used for up to 350 miles of combat range. Farrier only flew around 100 miles, which meant he should have still had plenty of fuel to use.

In the movie, we see German planes painted yellow at the nose, which is incorrect at the time. However, this is a conscious decision from the director, who said that it was for the ease of identification for the audience.

Inaccurate or not, most viewers would agree that Dunkirk is an amazing movie.