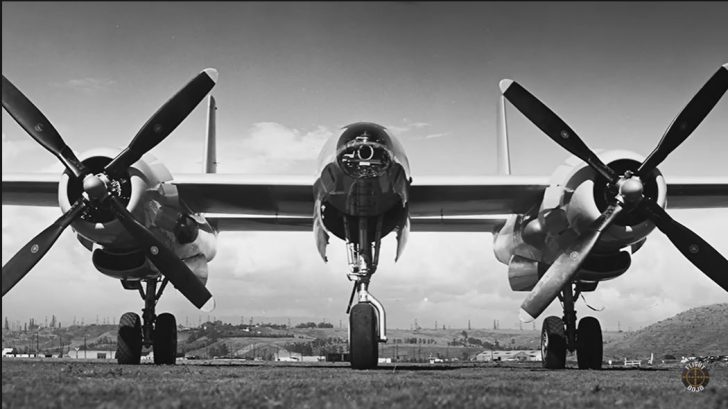 Originally Hughes’s high-speed aircraft was intended to fulfill a variety of roles. But since it was constructed from wood, the Air Force didn’t show any interest in it.

As luck would have it, Colonel Elliot Roosevelt, the son of then President Roosevelt was interested in photo reconnaissance aircraft and was impressed by the initial D2 model. It wasn’t long when Gen. Hap Arnold received pressure from the White House to order Hughes’s D5, but the army still had reservations about the plane. Gen. Arnold finally gave in and ordered the D5. However, his staff was very much against it.

The layout of the D5 was quite similar to the P-3 except that the nose cone of the aircraft contained weapons. Also, the front of the XF-11 had photographic equipment. The pilot sear is offset to the left so that the second crew member sitting behind the pilot can fulfill the role of the navigator and photographer.

Another interesting feature is the full-span wing flaps. Engines were powered by the monstrous r4360. The XF-11 was also a lot lighter than the B-17.

Due to production delays, the XF-11 was still not flown, and the war was already coming to an end. In May 1945, it was already ordered to be canceled. However, Hughes was still determined to finish the design, and the construction of two prototypes proceeded.

The first prototype encountered issues and it had to undergo several redesigns. The aircraft began operational testing in early July. Hoping the army would still change their minds, instead of its first test flight, Hughes opted for a full flight although it was stipulated that the first test flight should be no more than 45 minutes.

Hughes filled the plane with 1200 gallons of fuel, and didn’t get the full briefing from the engineers that could have reminded him about the propeller seal leak would have been life-threatening if he flew longer than 45 minutes.

Also, once he took to the sky, radio failures prevented him from contacting the chase plane of the army air force fielded for the test.
The aircraft then yawed sharply and caused it to lose altitude quickly.

While Hughes’s attempted to save the aircraft by landing on the Los Angeles golf course, the plane started to drop and crashed into a neighborhood surrounding the country club.

Miraculously, he survived the crash, suffering from severe burns, 11 broken ribs, a protracted lung, and a displaced heart. When he recovered, he was still adamant to fly the second prototype. When the army initially refused, he offered a 5 million bond in case he crashed the plane again.

April 4, 1947, was a personal victory for Hughes when he successfully flew the second prototype. However, the XF-11 eventually became a victim of budget constraints. Other planes were also converted to reconnaissance planes, making XF-11 irrelevant.

The XF-11 was eventually transferred to the Air Force base in Wichita Falls, remaining unflown until it was finally scrapped.