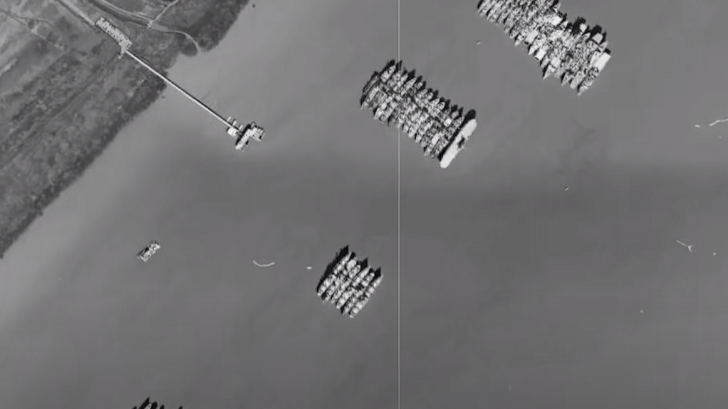 The US maintains a National Defense Reserve Fleet composed of ships for national emergencies. The Suisun fleet in California is one of the eight original fleet sites, hosting 60 ships at one point. It was officially closed in 2016, leaving two active fleets remaining – the James River Reserve Fleet and the Beaumont Reserve Fleet. In this article, we picked out the four most notable ships that once called Suisun Bay their home.

A non-self-propelled barracks ship of the US Navy had no means of maneuvering and only served as temporary housing for sailors. It only lasted two years in service due to its claustrophobic layout and the presence of lead paint and asbestos inside.

The deep-sea drillship platform was built to “go fishing” in the Pacific Ocean. In the 70s, a soviet nuclear-armed submarine called K-129 sank in the middle of the Pacific Ocean and the US saw an opportunity to recover it. To do this, they had to make the Glomar Explorer – a ship big enough to fish out the sunken Soviet sub 17,000ft beneath the surface.

The Woban-class district harbor tug played a role during Pearl Harbor. It rescued sailors, fought fires, and pulled ships away from target locations. After its WWII service, Oklahoma City commissioned it as a fireboat for 50 years. In 1989, it became a national landmark thanks to its service.

This battleship was the last lead ship of any US battleship class. USS Iowa is the only battleship to serve in the Atlantic theater and destroyed the most carrier-based aircraft during its service. In total, the ship has nine battle stars, making it one of the best Naval ships in the world.