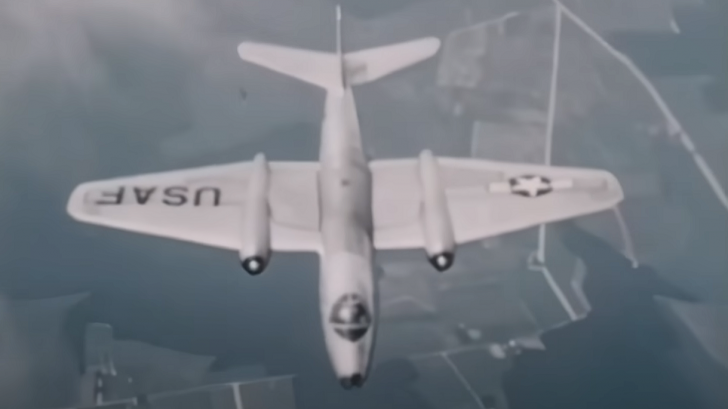 1. It Had To Be Americanized

At first, the US wasn’t interested in the British Canberra. It needed to fit American standards, as even the thread on the nuts and bolts was different than British standards. A lot more technical alterations were done for America to be finally confident in taking in the British aircraft.

In a series of tests done on February 21, 1951, a Canberra took off from Warton, England, to Gander, Newfoundland, and Labrador, Canada, becoming the first jet aircraft to perform a non-stop unrefueled flight across the Atlantic. The flight was part of the USAF’s evaluation process to determine the aircraft’s performance.

America’s B-57A variant closely resembled the British Canberras. The only main difference was the advanced rotary bomb bay that was used by the B-51s. Its new bomb bay allowed the plane to maintain maximum speed during the final approach and permitted the palletization of the bomb load. The Rolls-Royce Avons were also swapped out for the Sapphire-based J65 powerplant.

British Canberras produced a lot of exhaust because it was started with cartridges. It would emit a defined cloud of thick black smoke that filled the air around it. Though US engineers tried to minimize the smoke, the aircraft still gave off a noticeable amount of exhaust during startup.

The navigators also played the role of the bombers inside the Canberra.  In the B variant, the Canberra’s tandem seat allowed the use of conventional ejector seats for both crew members as well as allowing for a gunsight to be installed.

Atypical airbrakes can be found on the top and bottom surfaces of the Canberra’s wings. These forty hydraulically raised fingers acted as brakes and were kept in both the US and UK versions. Hydraulically-operated airbrakes were also fitted on the rear fuselage in the American B variants.

The whole bomb bay floor can be pre-loaded with bombs to reduce the amount of time needed for reloading. In emergency situations, the pre-loaded bomb bay floors are swapped over so Canberras can quickly turn around and get sent back to the air. It was also tested to fit downward-firing machine guns to rain bullets on the ground.

In this configuration, Canberras are painted orange to differentiate themselves from the targets they are towing. They were equipped with powered cable drums in the bomb bay to trail the targets from canisters located inside the tail section.

9. Had A Specialized Reconnaissance Variant

Canberras weren’t just used for bombing. The RB-57D variant preceded the famous U-2. It had a greater lifting capacity and carried larger payloads of photographic or electronic recon equipment. However, its wings had a limited lifespan and needed regular rebuilding to function. It flew 60,000ft over Soviet territory and was never shot down.

10. Another Variant Had Bigger Wings

The RB-57F had a longer wingspan than its predecessor. To compensate, it was fitted with two additional turbo jet engines. It was mainly used for weather reconnaissance and monitoring atomic bomb tests.