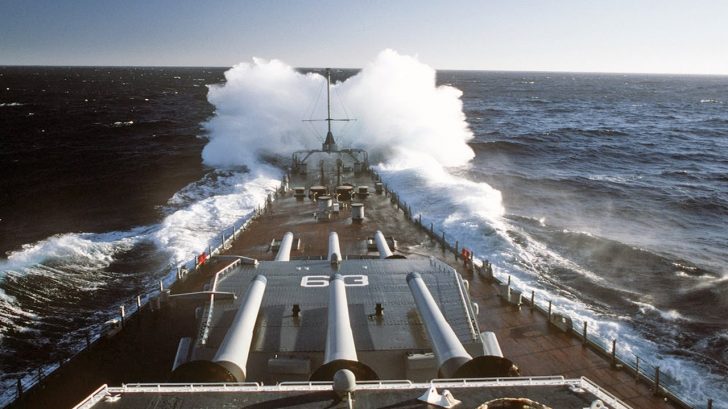 The historic battleship was the 4th Iowa-class ship ordered in June 1940. The 5th and 6th ships were laid down but never entered service, making the USS Missouri the Navy’s last American battleship ever commissioned.

Battle of Iwo Jima and Okinawa

Missouri supported Allied troops during the invasion of Iwo Jima by shooting down enemy planes and escorting carriers. During the battle of Okinawa, she downed five aircraft and had partial credits for another six planes.

A Japanese pilot decided to crash his plane into Missouri’s hull, resulting in gasoline spreading on the deck and creating a fire. Thankfully, crew members put it out before more damage was done to the ship.

After atomic bombs hit their country, Japan finally decided to waive the white flag. USS Missouri was picked to host the ceremony for Japan’s official surrender.

Missouri was the first ship to enter Korean waters during the Korean War. She fired her guns to distract enemy troops from the Incheon landings.

Following its retirement, it became a tourist spot due to its rich history. Tourists around the world wanted to see the ship where Japan surrendered. The ship logged 250,000 tourists every year.

Under Reagan’s program to have 600 ships, Missouri was once again reactivated and underwent modernization. Harpoon and Tomahawk missiles, plus Phalanx guns, were fitted to the upgraded ship.

She fired her first Tomahawk missile on January 17, 1991. By the end, Missouri launched 783 shells and 28 Tomahawk cruise missiles.

After spending years docked and forgotten, USS Missouri was restored as a museum ship at Pearl Harbor in 2009. Today, the legendary battleship watches over the USS Arizona Memorial Site.