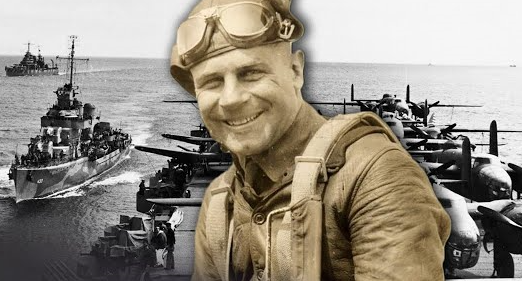 Reeling from the attack on Pearl Harbor, the United States needed to give an answer, and they needed to do it swiftly. Japan had to pay. But Japan was far away and impenetrable. Or was it?

In the days following Pearl Harbor, this was the question on President Roosevelt’s mind. It was James “Jimmy” Doolittle who would step up to the plate with the answer: the Doolittle Raid on Saturday, April 18th, 1942.

To bomb Japan and prove that it was indeed not impenetrable was no small task. The mission would take some considerable risks. The USS Hornet aircraft carrier would cross the Pacific in silence with sixteen B-25 bombers on deck.  Bombers had never before taken off from a carrier; these would be the pioneers. And because they would have to fly a considerable distance to bomb Japan and land in China, they needed to be heavily modified for more fuel capacity and less weight.

The secret, select crew of twenty-four would get just three weeks of training in simulated carrier deck takeoffs, low-level and night flying, low-altitude bombing, and over-water navigation. Four months after Pearl Harbor, the plan was ready to set in motion.

But it did not quite go as planned. 750 miles from Japan, the Hornet and its escorts were spotted by a Japanese patrol ship and Doolittle was forced to launch the attack 10 hours and 200 miles too soon. The bombers arrived in Japan around noon, hitting ten military and industrial targets in Tokyo, two in Yokohama, and one each in Yokosuka, Nagoya, Kobe and Osaka. About fifty Japanese were killed, including civilians, and another 400 injured.

Due to low fuel, the bombers were unable to make it to the designated landing sights in China, most crash landing along the coast. Three crew members were killed and eight captured. Every plane that participated in the raid was lost, causing Doolittle to fear that he might be courtmartialed.

Despite the loss, the Doolittle Raid was considered a massive success. It gave the United States a much needed morale boost and fractured the confidence of Japan, causing them to expand their defense to a wider range which would ultimately cost them greatly. Doolittle could have only hoped that his endeavor would be so influential. And not only did he not get court-martialed, he was instead promoted two grades to brigadier general and awarded the Medal of Honor.

You Can Watch The Full Documentary Here: