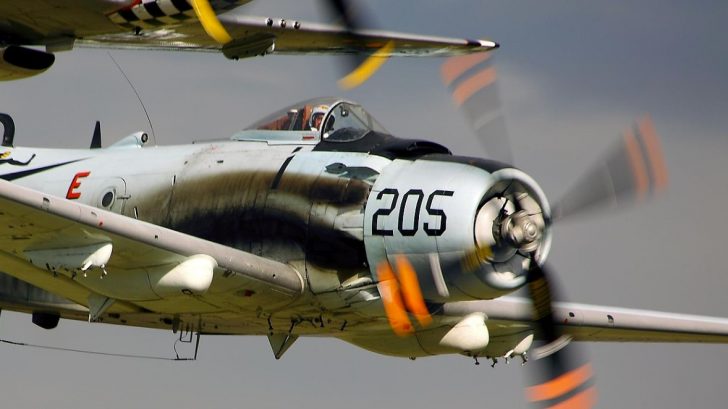 It seems like the Skyraider could do just about anything. With a remarkably long and successful career, here are 5 facts about the celebrated plane:

5. It Was Designed In A Day

When an artist is hit with inspiration, let him do his thing. Ed Heinemann, the designer of  the Douglas A-1 Skyraider, pulled a bold move when he asked that BuAer cancel plans for the BTD-1. He designed the Skyraider in just one night, from his hotel room no less. He was given 9 months to make paper come to life. Behold, 9 months and one day later, the near flawless XBT2D-1 prototype came through.

This beloved plane has quite a list of nicknames including “Spad” or “Super Spad” in reference to French WWI fighter, “Able Dog”  as the 1950s phonetic for AD, “Queer Spad” or “Q-Bird” for the electronic warfare-specific variants, “Guppy,” Flying Dumptruck,” “Old Faithful,” “Old Miscellaneous,” “Destroyer,” “The Big Gun,” “Fat Face,” and the Vietnamese called it the “Crazy Water Buffalo.”

Did this plane get used a lot, or what?

3. Built For WWII, It Became the Star of The Korean and Vietnam Wars

Douglas was awarded a contract to build 548 near the close of WWII. But when WWII ended, the contract was cut back to 277 airframes. It was initially thought that the Sky raider might quickly become obsolete. That couldn’t have been more wrong. First there was Korea. Then there was Vietnam. The Skyraider played essential roles in each and beyond. From the start of production in 1945 to the completion if the AD-7 in 1957, 3,180 Skyraiders were build in seven versions and 28 variations. The only major criticism seemed to be that wasn’t enough of them.

2. It Excelled At Search And Rescue

In Southeast Asia, the Skyraiders performed phenomenally well at search and rescue. They could fly over a downed airman for an extended period of time unlike the jet aircraft. Quite durable and with massive firepower, they could also fend for themselves.

1. 2 Medal of Honor Recipients Flew It

We think that pilots in general are some of the finest of human race, but it never hurts for them to have a reliable plane to perform to the best of their abilities and beyond. On March 10th, 1966, United States Air Force Major Bernard Fisher earned himself a Medal of Honor for landing under fire to pull another downed pilot into his Skyraider.