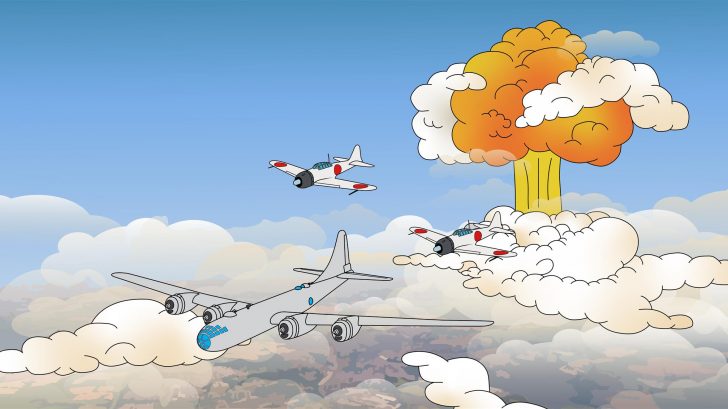 Where were the legendary A6M Zeros that sank Pearl Harbor?

The Fat Man and the Little Boy. Two words that turned the tide of the war and forever changed the fate of the small nation-island with imperial ambitions.

The mighty Imperial Japanese Army Air Service could have easily intercepted the B-29, right? How was Tibbets able to fly over the Japanese airspace without any resistance?

Let’s answer that question by starting at the top.

1. The Hate-Hate Relationship between the Japanese Army and Navy

Imperial Navy Commander Masataka Chihaya himself admitted that the high command of the two military arms often fought over strategic command and never shared intelligence with one another.

The Air Forces were notorious for their outdated doctrines. For example, Air units took command from Ground Army Commanders. This led to numerous conflicts, not to mention an anomalous departure from the chain of command.

Imagine that your Army and Navy are frenemies. This could lead to an absurd situation where an Army aircraft in New Guinea would fly to the Philippines for maintenance when there is sufficient manpower to carry out the task in… you guessed it: New freakin’ Guinea. Oh, that actually happened, which is nuts.

Japan is cursed with scarce natural resources, and its main motivation in joining the war is to acquire a lebensraum for itself.

So when the Japanese Empire blanketed the Pacific, the Allied forces decided to bomb the country for three years – marked by the famous Dolittle Raids in 1942 and ended in the explosion of the second bomb in Nagasaki in August 1945.

The resource-depleted empire was trashed. 50% of Tokyo was reduced to rubble, and the assault on the smaller cities destroyed vital industries and greatly demoralized the Japanese citizens. Which leads us to ask this big question…

3. Where the hell was Japan’s Superior Air Fleet? It was wiped out.

The Allies destroyed 15 of Japan’s major oil refineries and facilities.

Moreover, the destruction of railways cut the supply of coal to the main island of Honshu, which means no operating industries.

Which means no production.

Which means no aircraft to intercept the bombers.

Because there were no sufficient airways and facilities to store the Air Force’s Fleet, the remaining fighter planes were placed too close to each other,  and were easily destroyed.

Go on. Blame it again on the High Command.