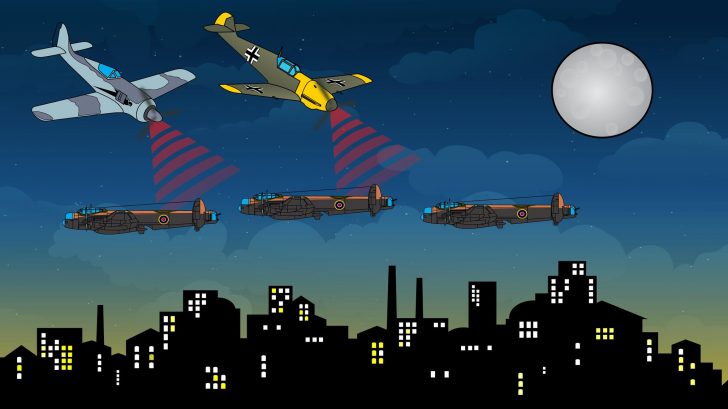 How the scarcity of night fighters led to Wilde Sau – a new tactic that helped in the Luftwaffe defense of Cologne and in the destruction of 30 British Aircraft in a single night.

When World War II rolled around, the principles of aerial combat that were first formulated during the First World War proved to be obsolete, as the capabilities of the aircraft have advanced and developed during the interwar years.

Case in point: Night fighting. During WWI, the fighters relied on moonlight and sheer eyesight in night raids. With the introduction of Ground-based and Aircraft-based radars, the limitations were drastically reduced, but still not nearly enough for one side to gain aerial supremacy over the other. Eventually, Night Fighters were born, and so were the tactics optimized for battles in the darkness of the night.

But the Luftwaffe High Command was reluctant to proceed with Heinkel He 219 Owl’s development because of its radical innovation. With the Germans pressed for time, General Josef Kammhuber desperately lobbied for the production of this groundbreaking night fighter. The production contract for the Heinkel was inked only in August 1942.

When the 653 Bomber Command raided Cologne on July 3, 1943, the Luftwaffe implemented a new aerial defense tactic which helped in the successful defense of the industrial city of Cologne. That defense system came to be known as the Wilde Saus, or Wild Boar.

Here’s how they did it.

The mix of bomber pilots and experienced blind flying instructors were assembled for the Jagdgeschwader 300 wing-unit.  Major Hajo Herrmann proposed the use of single-engined day fighters because they were agile enough to quickly roam over the target area with the aid of searchlights.

For the initial Wilde Sau test run, the Luftwaffe engaged daytime marvels Fw-190’s and Me-109’s and tracked the British bombers from above, whose silhouettes were apparent against the well-lit target cities.

So the German Flak Corps, which was the Anti-Air Artillery Formation, became an essential part of the Wilde Saus’ success, but it came with numerous trial-and-errors that eventually resulted in an ingenious solution – Altitude limitations.

During test missions, the Flak Corps stationed on the ground found it difficult and time-consuming to coordinate ceasefires with the fighters. The introduction of altitude limitations greatly reduced the risk of firing upon German aircraft by setting a ceiling on the trajectory of the AA units, so that the fighters can freely operate above that setting.

3. The German fighters used he burning city from below to hunt the enemy bombers.

Before the Wilde Sau, the Germans employed night fighters installed with short-range radars which were informed of specific altitudes and headings to track the British bombers. Aside from the shortage of night fighters, this method had a drawback: it would only succeed if the night fighters got close enough to the bombers.

So with the help of searchlights and colorful target flares, the German fighters and the Anti-Aircraft Corps were able to accurately predict the Allied Forces locations.

The Luftwaffe engaged the Jagdgeschwader 300 unit to defend Cologne and destroyed 30 British aircraft with the Wilde Sau tactic. It was a success.

4.  As successful as the Wilde Sau was, it was only meant as a temporary defensive measure.

The British capture of Junkers Ju 88R-1 Night Fighter revealed the existence of crucial German technology still in the works – the Lichtenstein Air-interception radar. This discovery proved to be a costly and fatal, and this prompted the German command to invent the Wilde Sau tactic in the first place.

And after the Battle of Cologne, the Germans went on to destroy  64 more aircraft on the night of August 18, 1943, and 56 more a week after.

As with the Allies’ decisive victories during the war, luck would play a crucial role in the abandonment of the Wilde Sau tactic.

The worsening weather conditions during the latter part of 1943 resulted in accidents and frozen parts, not to mention the increased difficulty in the maintenance of the Jadgdweschwader 11. The tactic was eventually abandoned in 1944.