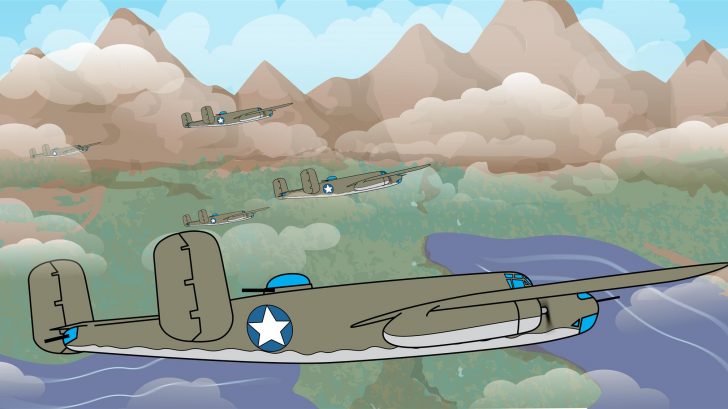 In 1942, the Americans gave the Japanese a ”Mini Pearl Harbor” of their own.

The 1942 Lae-Salamua Raid is not as celebrated as the Battles of Midway, Guadalcanal, and Coral Sea, but it was the Pacific conflict that set the stage for the three.

The American assault on these small towns of New Guinea was a fatal blow to the Japanese expansion in the Pacific because first, these towns were strategic outposts that would position Japan to attack Port Moresby; and second, Salamua was a  crucial operating base for the Japanese Imperial Air Service which would have received the Zeros fresh from their aerial campaigns.

In this battle, the iconic Lexington and Yorktown took center stage and made up the two waves of attack for the reclamation of Salamua-Lae. Both carried a fleet of USAAF’s premiere aircraft at the time.

What made this Pacific campaign so special for the Allied Forces? Let’s take a look at these three surprising facts.

1. The Allies found it immensely difficult to even reach the Salamua-Lae

The Lexington and Yorktown were parked 45 miles offshore, which meant that the Wildcat escorts – each carrying two bombs under its wings -were burdened with more weight and drag and essentially made them operate at their maximum range limits.

To make matters worse, Lexington’s design limitations and the sheer number of planes it carried exposed its flaw. Because of this design limitation, the Wildcat escorts were the first to take off, they were forced to operate and fly mindlessly until the bombers were finally deployed.

In fact, the Wildcats had to turn back, return to the airstrip, and wait to be redeployed in order to eventually catch up with the bombers already in flight.

2. The Owen Stanley Mountain Range channeled Gandalf’s “You Shall Not Pass.” Good thing the Allied Forces did not channel Balrog.

The Owen Stanley Range in Central Papua New Guinea is a rugged country that housed the brutally infamous Kokoda Track. As the Devastators carrying 500-pound bombs approached the Range, they realized that the mountains were taller than they looked. They were suddenly in danger of falling short from getting over the hump.

Thankfully for the Allies, Lt.Cdr. James H. Brett saw a small patch of flat area. This got him over the mountains and got him to the other side. He had reportedly radioed James Thach and said “Halfway House.”

3.  Only one Allied aircraft was gunned down by the Japanese.

The Lexington and the Yorktown launched 104 aircraft. 103 returned.

For many pilots that day,  the Salamua-Lae raid was their first action against warships and anti-aircraft fire, which provided them much confidence in the next conflicts later that year.

The 16 Japanese ships they had to battle that day were a mix of destroyers, transports, mine layers , and seaplane tenders. That’s a lot for a first time, and a lot of invaluable experience to boot.