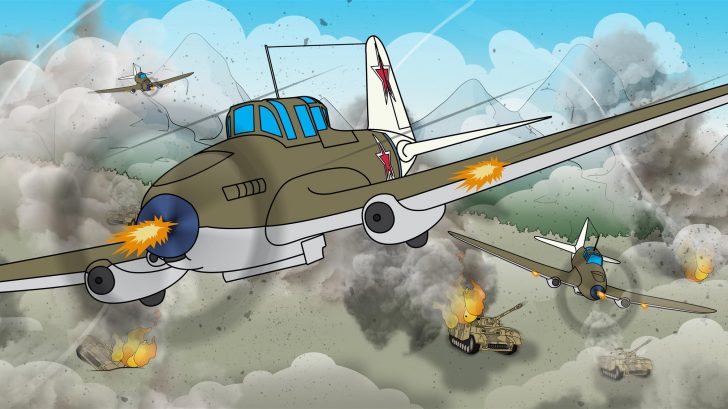 In 1944, The Luftwaffe flexed its menacing presence on the Eastern Front. Then the Soviet Forces – fronted by the Ilyushin Il-2 – launched massive aerial offensives that shattered their stronghold both on the ground and on the air.

The German air force was fronted by sterling aircrafts such as the Messerschmitt Bf 109, the Junker Ju 88, and the Focke Wulf 190, but they were about to find out that the continued operation of the obsolete Bf 110 and the Ju 87 would entrap them in the Soviet’s Red Storm.

Meanwhile,  the Russians continued the rapid development of the Il-2.

This aircraft was heavily criticized on the aftermath of Germany’s 1941 invasion of Russia because of its weak attacks against armored enemy vehicles and its clunky maneuverability, but rapid development and redesign eventually turned it into what the Germans feared as The Flying Tank.

The Flying Tank was a fearsome assault aircraft that earned numerous monikers throughout its prolific operational history.

It was officially known as the Sturmovik or the Storm Bird, and it was so loathed by the Germans that the German ground troops went out of their way to approach a downed Sturmovik pilot and shoot him in the head.

Because of the massive damage it dealt against the Wehrmacht in the Eastern Front, the Nazis called it many names such as the Flying Tank, Meat Butcher, Iron Gustav, and Black Death.

The Ilyushin Il-2 Sturmovik was a ground-attack aircraft produced by the Soviet Union. With 36,183 examples of the Il-2 produced during the war, and in combination with its successor, the Ilyushin Il-10, a total of 42,330 were built, making it the most produced military aircraft design in history. from WWIIplanes

The Ilyushin Il-2m3 was a bona fide tank blaster.

When the winter of 1943 came, an estimated 12,000 Storm Birds served primarily as extreme low-level fighters against the Panzerwaffe.

The Ilyushin pilots successfully destroyed enemy ground forces by swooping down to as low as 20 feet off the ground, then circle to the rear to attack the thin-armored rear of tanks.

The Wheel of Death

The Soviets learned the hard way from their lapses during the war’s early years.

They called it the Wheel of Death.

The Soviet initially executed the wheel by deploying the Il-2 in groups of 12 that formed a defensive circle. The use of this tactic compensated well for their rocket’s inaccuracies and ensured considerable damage to German defenses and artillery positions.

Moreover, this highlighted the plane’s reputation as a heavily armored ground attack aircraft specifically made as a tank destroyer. It was armed with heavy cannon and eight RS-82/132 Rocket projectiles.

True to their innovative spirit in the military realm, the tactic eventually morphed into a feared offensive: The Storm Birds would encircle a target and each plane that formed the circle attacked in turn until their ammunition ran out.

The Soviets came a long way from their fall in Operation Barbarossa, and their radical shift in the industrial transformation of their forces that focused on attrition proved to be an advantage over the Luftwaffe forces designed for short, blitzing campaigns.

The Storm Bird truly embodied this revolution and helped Soviet’s decisive take-down of the Luftwaffe from their lofty supremacy in the skies.