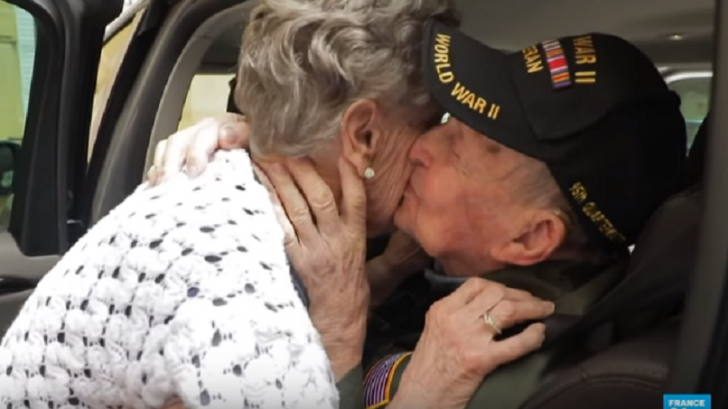 You know how people often say that absence makes the heart grow fonder? Well what you’re about to read will make you believe in it 100%.

It was in 1944 when 25-year old K.T. Robbins met Jeannine Ganaye in a town in France. Then-18 year old Ganaye was his first love. Looking back, Robbins said in an interview:

“She’s just a sweet girl. I think she loved me.”

After leaving to fight for the war(he was sent to the Eastern Front), he had it in his mind to come back for her. But somehow, he never did. He went back to the US and eventually got married. Ganaye also did the same. But that didn’t mean he had completely forgotten about her.

“I told her maybe I’ll come back and take you, but it did not happen like that.”

He lost his wife in 2015 but it was only recently when he found out that Ganaye was widowed too and at 92 years old, she was still living in France but already staying at a retirement home. He got this information from a French broadcaster who interviewed him about World War II.

Just this June, they finally met again after 75 long years. Robbins didn’t beat around the bush and instead told her straightforward that time had not dimmed or lessened his love for her.

He even showed Ganaye a photo that he always kept. Ganaye revealed that she too thought of him all the time.

“When he left in the truck, I cried. I was very sad. I hoped he would come back after the war.”

As he was leaving the nursing home, Robbins was moved to tears. When she said, “Bon voyage”, he replied with, “I love you.”

They promised to see each other again and it’s clear that they were both heartbroken when it was time for Robbins to leave again.