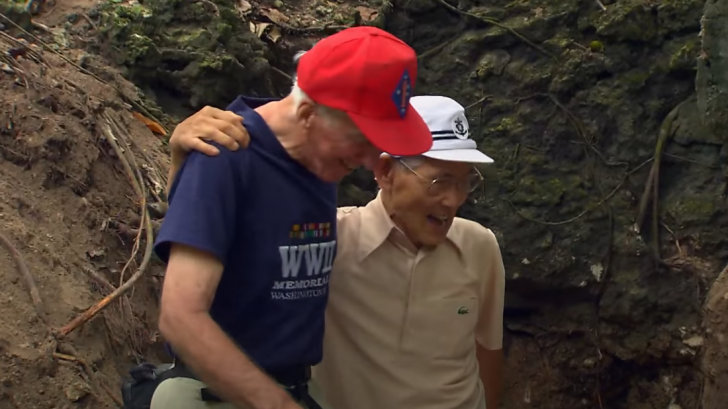 It was many decades ago when these men were young, fighting out of a foxhole against each other in the brutal Pacific theatre during WWII in the Battle of Peleliu in 1944. Now, some decades later, they meet face to face where they both fought for their lives in their youth. 2 from the United States side. And 2 from the Japanese side.

But this time, it’s different. Time has passed. Lives have moved on. They’re old now. And now it’s time for some sort of closure. Of course they’ll never forget the horrors of war, and the friends they lost on both sides. But it’s a different world now. And forgiveness is a real thing. What a wonderful example of how time heals wounds and people can can put it all behind them in the past and become friends.

In this video, we find both sides meeting up and sharing their experiences together and recollecting on the times they were there. Even as far as climbing up a hill to a Japanese naval gun emplacement together and reminiscing on their time battling it out.

You can just feel the history in this clip and it will put a smile on your face to see that who were at one time enemies, are now friends until the end.