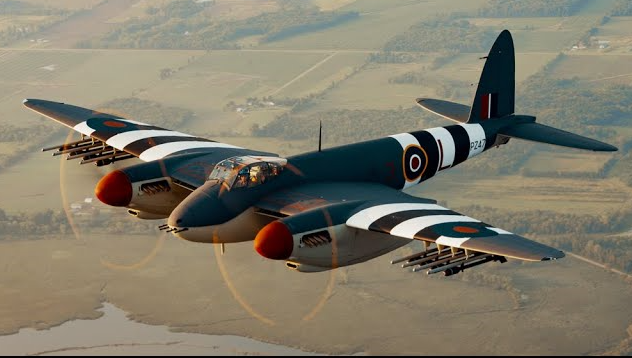 In an aerial battlefield of steel and fire, what would you do if you were asked to fight with a wooden aircraft?

Crazy as it may sound, an aircraft made almost entirely out of wood fought during the World War II, and it was called the Mosquito.

The Mosquito was mocked and ridiculed by most pilots and the British air ministry during its design period. However, after the first Mosquito took to the skies, it quickly proved that it was a legend of its time.

1. It was insanely fast

The Mosquito was conceived by Geoffrey de Havilland, an aero engineer who had a reputation for innovative high-speed aircraft designs. He knew that speed was the name of the game, and so he designed the Mosquito with this in mind. With powerful Merlin engines and fewer armor plating to slow it down, it became the fastest plane of its time. It had a top speed of 392 mph (631 km/h) at 22,000 feet (6,700 meters), easily beating the popular Supermarine Spitfire.

2. It was the most versatile plane

The Mosquito was originally designed to be a high-speed bomber. However, due to its outstanding performance, many variants were produced for different roles. Some of the Mosquito’s roles include low-level and high-attack day and night bomber, long-range photo-reconnaissance, minelayer, pathfinder, high-speed military transport, long-range day and night fighter, and fighter-bomber.

3. It was easier to manufacture

During the late 1930s, there was a shortage of skilled metal workers in Britain to help build conventional aircraft. Moreover, resources are scarce due to the continuous war effort. The Mosquito was not affected by both of these factors. Being made almost entirely out of wood, the Mosquito was easily made by the abundant workforce of skilled woodworkers and craftsmen.00

4. It can fly high and low altitudes

Lightweight and powerful, the Mosquito can climb very high altitudes of up to 44,600 feet (13,600 meters). This allows the Mosquito to escape attackers or dive down unwary targets. Pilots can also dare to fly really low, avoiding both radar and anti-aircraft guns. This is made possible by the Mosquito’s amazing speed.

5. It was deadly accurate

Armed with four .303 Browning machine guns in the nose of the plane, the Mosquito can aim more accurately compared to others. The positioning of the guns also gave the Mosquito more concentrated firepower. Due to its accuracy, the Mosquito was later used to intercept the terrifying V-I flying bomb.