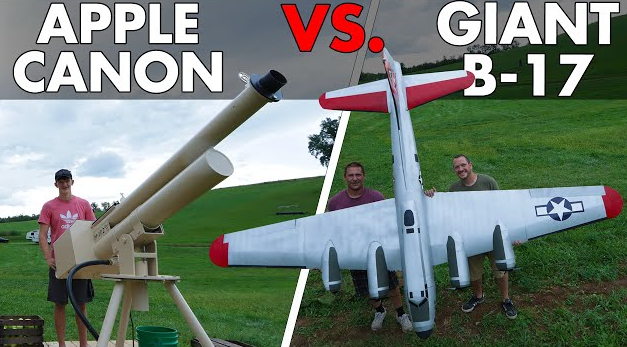 Want to see a historically accurate presentation of how the B-17 bomber (also known as the Flying Fortress) works? The guys from the YouTube channel FliteTest did not only built a B-17 for it to fly, but they’ve also tested it as a target by firing apples from air cannons. At first, you’ll be amazed on how it flies smoothly, but once they’ve shot it with apples, that’s when things got real.

First shoots attacked the wings of the B-17 which kept it running still until eventually one apple got to the center of it and almost cut it in half. Once it landed back to them, it was like seeing the real Flying Fortress flew back home during the World War 2. Exactly the reason, why the B-17 was considered as one of the legends in the military aircrafts. — For each time one wounded Flying Fortress returned to its base, it brings crews safely back home.

B-17 was originally designed by the Boeing Aircraft Company in 1934. It only came into production in a small number. But this Flying Fortress proved to be an effective weapon system during the WW2 than any other American aircraft, making it true to its name. Up to this day, the B-17 are still functioning and are put to good use as a search-and-rescue aircraft modified to drop life rafts by parachute.

If you want to see a real model of the B-17, you can visit the exhibit at the Air Mobility Command Museum.