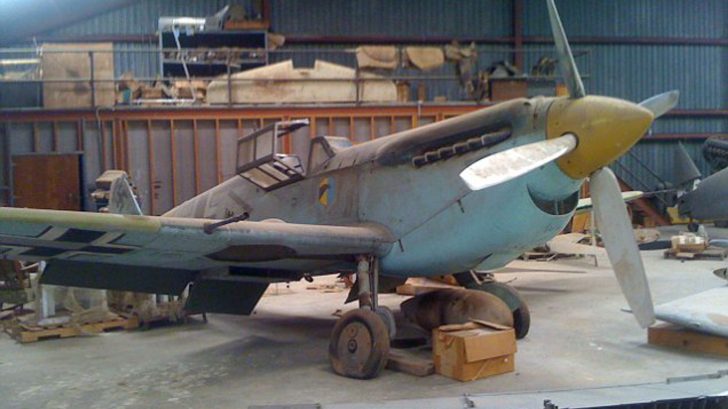 Daily Mail / Stars of the Skies

For better or for worse, director Guy Hamilton wanted to represent both sides equally. This was seen as a very controversial move. After all,  the effects of the second world war were still felt in some countries. Nevertheless, Hamilton was adamant about this, leading to some very interesting scenes and hiring decisions.

In order to fully represent the German side, the film hired native German speakers. Back then, Germans were mostly portrayed by anglophone actors. The team also hired a German technical adviser, Adolf Galland, who was a Luftwaffe Lieutenant General in the war. He only came aboard under the premise of equal representation of both sides.

Due to its controversial decision to portray both sides equally, the film had problems in finding funding – or even securing it. There was even a fair bit of public outrage when German planes with swastikas were seen flying. Fortunately, the film finally found its footing after its rough start – from a budget of $3 million to a whopping $14 million.

4. Had A Fatal Accident

With the number of warbirds used during the filming, accidents were expected to happen. Unfortunately, one Spanish pilot was in a fatal crash involving a Messerschmitt. The pilot was to ferry the plane to a spot but in the middle of the task, he “decided to do aerobatics” which unfortunately led to his death.

The producers needed to be creative when it came to capturing its extensive aerial combat. They did this by personally customizing a B-25 Mitchell to accommodate filming equipment. The aircraft was painted with bright colors and had cameras fitted on the nose, tail, and waist gun positions. An articulating arm with a camera was also installed in its bomb bay to capture shots from every angle.

CGI was not a thing back then. Computers then were far too archaic to be able to process the fancy special effects we see in cinema today. Instead, the producers opted to do almost all of its aerial scenes using real airworthy airplanes. A lot of the film’s budget went into purchasing and renting the planes they used for sets.

There was a little bit of misunderstanding when it came to using explosives in the Duxford Airfield. After convincing the higher-ups, the film had permission to blow up the hangar – or so they thought. According to the document they signed, they were only permitted to set off explosives inside the hangar, not blow it up. Well, they did so – twice – because they failed the first time.

Because of the need for airworthy and display planes, the production’s aircraft collection quickly grew bigger than expected. At its peak, it was reportedly the 35th largest air force in the world but that’s assuming all of it was airworthy. In total, it had 27 Spitfires, 6 Hurricanes, 50 Bf 109s, 32 Heinkel, and 2 Ju 52s.

Bill Foxley was cast to show what he suffered during the war. He was part of a Vickers Wellington test flight when the plane’s flaps malfunctioned and caused it to stall and crash. Though initially surviving without injuries, Foxley went back in to rescue the wireless operator. He had severe burns on his face and hands. His time in the movie showed how horrific war can be for a lot of people.

Internal disputes are always a given in large-scale films. Such was the case between Adolf Galland and Guy Hamilton. In one scene, Galland argued that the infamous salute was only given when in the presence of Hitler but Hamilton stood his ground and conflict ensued. Galland threatened to boycott the movie and label it as propaganda. After seeing the film in its entirety, he agreed to settle their differences and was “okay” with it but considered the scene inaccurate.