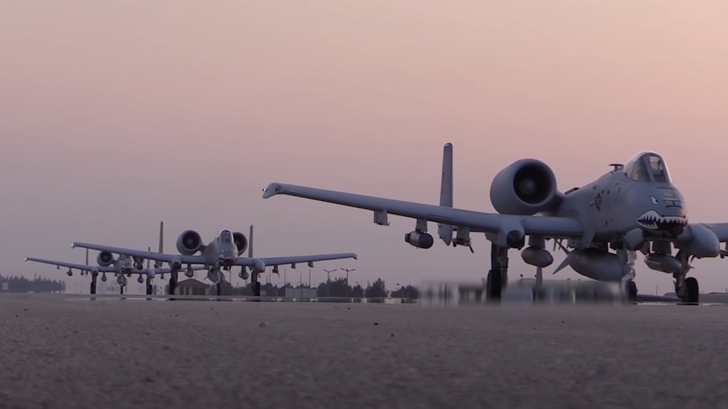 The ammo used for the GAU-8/A goes through a linkless and double-ended ammunition feed. This linkless system significantly reduces the potential of jamming and allows the spent casings to be returned to the ammunition drum. In addition, it also prevents the expended shells from damaging the plane.

A-10s have two hydraulic systems to ensure redundancy during operations. Both hydraulic systems are pressurized by the two identical engine-driven pumps on the left and right engines. If one hydraulic system becomes inoperable, the A-10 can still use both its ailerons, elevators, and one rudder.

If both hydraulic systems are gone, the A-10 still has one trick up its sleeve. This comes in the form of a fly-by-wire mode called the Manual Reversion Flight Control System. Using this system, the pilot can buy time and get to safety to avoid capture. Operating the A-10 under this condition for a long time is not recommended.

Another safety feature added to the A-10 concerns its landing gear. The A-10’s landing gears are not fully retracted into its body. Instead, the landing gears are slightly out, just enough to be used in emergencies. Because of this, Warthogs can do belly landings if needed.

Self-sealing tanks have been around for quite some time. This type of fuel tank prevents the plane’s tank from leaking fuel and catching on fire. All four fuel tanks of the A-10 are separate from the fuselage and located near the center of the aircraft. The tanks are also lined with reticulated polyurethane foam for protection.

The cockpit and parts of the flight control system are protected by titanium armor weighing 1,200lb. Its weight alone accounts for 6% of the plane’s total weight. The armor can withstand 23mm cannon fire and some 57mm shell fragments. Because of its thickness and design, it is called the “tub” or “bathtub” by pilots.

Since the A-10s fly way too close to enemy positions, it becomes an easy target for SAMs, MANPADs, and enemy planes. For those reasons, the A-10 carries both chaff and flare loads. Chaffs can confuse radar-controlled missiles because of their radar-reflective properties. On the other hand, flares are enough to bother heat-seeking missiles.

A plane with such a huge and prominent Gatling gun as the A-10 needs to be stable in the air. When firing short bursts of their gun, A-10s will create a lot of force that can destabilize the aircraft while flying. In order to keep it stable, the A-10 makes use of its large vertical stabilizers. Thanks to its stabilizers, the plane’s nose is kept from swinging uncontrollably.

The military’s budget has its limitations. Usually, they would prefer the cheaper plane compared to one that performs better. This is because mass production is a huge asset that the US has. The A-10 is a cheap plane that performs better than its price point. It has interchangeable parts and is also easily accessible, making it easier to repair and assemble.

Two Auxilliary Power Units (APU) are installed between the two potted engines. The APUs are smaller engines that can be found on larger aircraft. It allows the A-10 to start its main engine, generate electricity, and run hydraulic fluid pumps without external help.