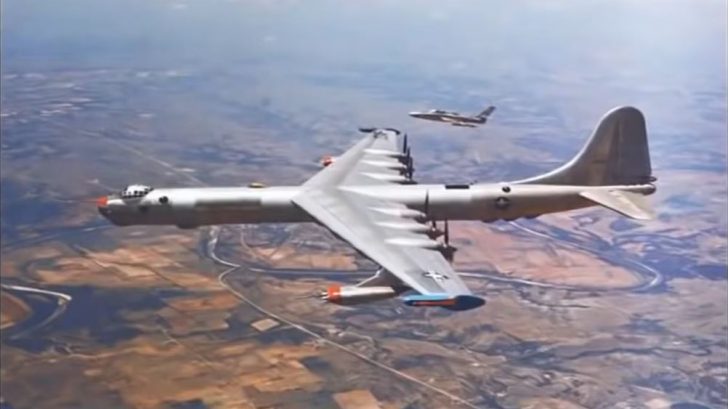 Built by Convair, the B-36 Pacemaker was operated by the United States Air Force between 1949-1959. During the 1950s, aircraft was one of the key elements in maintaining peace during the Cold War with Russia.

Here are the ten ways that the B-36 Pacemaker was a completely unique aircraft more than anything else:

1. It had the longest wingspan of a combat aircraft ever built

It had a huge 230 feet wingspan, along with a 163-foot length 4-story assembly tail.

2. It earned its distinction as the most heavily armed bomber in history

It had 16 remote control 20 mm cannons paired in the nose tail. It also comes with six retractable turrets concealed by sliding panels in the fuselage.

3. It became the first bomber to deliver any nuclear weapons to the US arsenal

The B-26 features four bomb bays inside without any modifications to the aircraft.

4. A large crew is often housed in two separate sections in the aircraft

The pilots, engineers, bombardier, and gunner personnel would be housed in the forward section of the aircraft. Meanwhile, five gunners would be staying at the rear cabin.

5. The B-36’s first notable accomplishment became a source of embarrassment to the Air Force

Air Force pilots headed to Pearl Harbor in Hawaii, and at the 5,000 mark, dropped 10,000 pounds of dummy bombs were. The entire flight and bomb drop went completely undetected. There was no publicity as the mission was written off as undetected.

Aside from the 30-foot wing spread, the fuselage was so long that 15 crewmen have to use a scooter to get back and forth.

7. The USS United States aircraft carrier was actually canceled because of the B-36

The B-36 was able to fulfill the need for long-range atomic striking ability. As a result, this infuriated the Navy, leading to the B-36’s ability to do missions as it claimed. Still, the B-36s still came out on top  in the end.

8. Early on in its service life, the B-36 symbolizes the national strategic air command policy of peace through air power

The crew of the B-36 was deployed in different parts of the world to reinforce its striking ability.

9. Throughout its lifetime, it was subjected to numerous modifications on a flying test bed for numerous theories

The airplane’s size and range led itself to experiments not possible with any aircraft before it.

10. The most interesting variation of the B-36 was the NB 36H Crusader Program

This variation was a result of the Air Force Program’s need to come up with a nuclear-powered aircraft. It carried a one-megawatt power reactor. It also made 47 flights between September 1955 to March 1957.

The B-36 was a long-range nuclear bomber that became a self-sustaining aircraft during its time. It stood as a tribute to the people that designed, tested, flew, and maintained it in one of the most unsettling times in United States history. Also, the fact that it was never used in combat showed the value of “keeping the peace,” well earned its name as the Peacemaker.