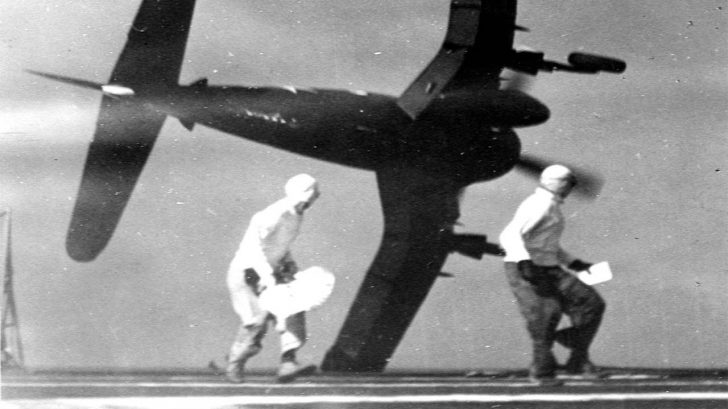 The two friends first met aboard USS Leyte in 1950. Hudner was assigned to the VF-32 where he piloted the F4U Corsair alongside his wingman, Jesse Brown.

Brown faced discrimination growing up in the early 1900s. Still, he became the first African-American to complete the Navy’s basic flight training program. During his time aboard the USS Leyte, Brown suffered from discrimination – some of it from high-ranking officers. Hudner found Brown’s story touching and pitied the way he was treated by his fellow servicemen. The two soon became close friends.

It didn’t take long for fellow pilots to respect Brown’s skills. An abort-landing exercise showcased how ahead he was compared to others. He rapidly applied the throttle too much during the approach. Brown then found himself in a torque roll a hundred feet above the USS Leyte’s deck. He recovered and stuck a landing that amazed the crowd on the deck.

Their squadron was deployed in Korea to help the retreating US soldiers by protecting them from the Chinese forces. During the flight, Lt. Bill Koenig noticed a thin spray of liquid coming out of Brown’s Corsair. After alerting Brown, his Corsair’s fuel needle dropped and he had to issue a Mayday call.

Brown dropped his reserved tanks and ordnance to prepare for a crash landing. The men watched as he crashed into snow and dirt. It wasn’t after a few minutes when the snow settled that the wreck was finally visible. Hudner saw Brown alive inside the cockpit but it soon became clear that he was waving in distress.

An Act of Bravery

The crew noticed black smoke coming out of its engine. Fearing an explosion, Hudner ejected his ordnance and dove in – no questions asked. He landed roughly 80 yards away from Brown and he hurriedly exited his own damaged plane to get to his wingman in time.

Brown was already suffering from hypothermia when Hudner reached him. His legs were crushed and pinned under the wreck, while his arms were frozen. Time passed as the two waited for rescue as Brown drifted in and out of consciousness.

It was already too late when the helicopter arrived. The ax couldn’t do any damage to the plane’s frame. Hudner was forced to evacuate, leaving Brown on the ground. Before he went, he promised his wingman that he would return soon with help.

The Decision and Repercussions

When Hudner came back, he begged officers to send help. However, the threat of an ambush made it a difficult decision for them to make. The final decision was to use napalm to bomb Brown’s crash site to prevent the Chinese forces from reaching the planes and his body.

Commanders would later issue an order forbidding pilots from doing what Hudner did to save downed wingmen. According to Hudner, he doesn’t regret his decision at all. He was awarded the Medal of Honor for his bravery during the war. He is the only Naval aviator to get this award.