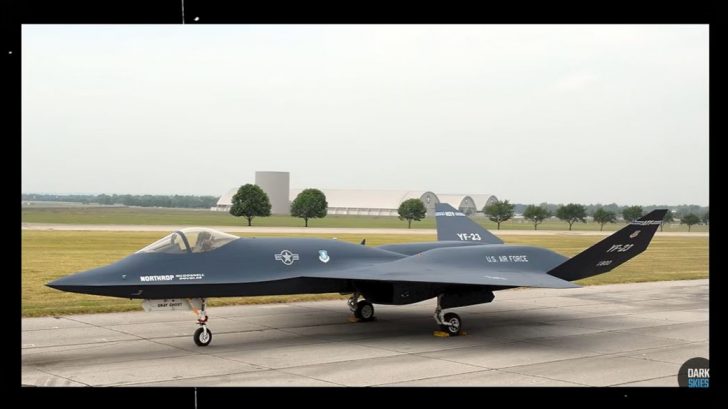 While the YF-23 may have shown promise, it ultimately lost to the F-22 Raptor.

But where does this legendary aircraft fare in history?

In 1981, the US started an advanced tactical fighter program to create the next generation air superiority fighter. To face a threat against the Soviets, the Air Force envisioned something that would integrate emerging technology and concepts like stealth, super cruising, short take-off, and landing.

Different plane companies presented their plans in 1986, which were later grouped into two competing teams. Northrop and McConnel Douglas were selected as finalist partners with their YF-23a design. This was challenged by Lockheed, Boeing, and General Dynamics with the YF-22a.

Both teams were given 50 months to test their prototypes. The winner will be America’s air superiority fighter in the 21st century.

Northrop YF-23 is designed to focus on the US requirements of stealth, survivability, and ease of maintenance. However, agility is not one of its priorities. It had a range of 2800 miles which could be extended with in-flight refueling. It had two prototypes- the Black Widow II and the Gray Ghost.

The YF-23 also had a cockpit near its nose and could accommodate only one pilot. The aircraft shared its cockpit and nose wheel components from the F-25 eagle and the FA-18 main landing gear to reduce costs.

Eventually, these placed it at a disadvantage against its main rival, who had better electronics and more advanced cockpit technology.

Still, the design was innovative in several ways. The plane can fly at supersonic speed without needing an afterburner while maintaining low observability. The Northrop team was incredibly proud of their finished prototype.

Meanwhile, Lockheed was developing the YF-22 Raptor. During one impressive test, the Raptor fired aim-9 sidewinder and aim-120 Amram missiles from its internal weapons bays.

While, in contrast, the Gray Ghost was considered the faster plane, the YF-22 accumulated 91.6 hours of flight time over the latter’s 65.2 hours. In April 1991, the AF announced the Raptor as the winner.

A Matter of Credibility

The YF-22 and the YF-23 were considered equally good. They can maneuver the same trimmed and high angle of attack, and both could also carry eight air-to-air missiles internally. Although two had great designs, the YF-23 was a better performer overall.

But why did the Raptor beat the Gray Ghost? In the end, it was credibility that mattered, not technical superiority. Lockheed was better at marketing and taking advantage of the weak spots of its competitors.

Moreover, Northrop has been suffering for four years of a bad reputation due to cost overruns during the development of the B2 Spirit Stealth Bomber. The Lockheed bid was also substantially lower. Ultimately, the YF-22 won the competition and developed into the F-22 Raptor.

Experts agree that the Gray Ghost would have performed just as well. It had better stealth and a more extended range at supersonic speed. These qualities have made it better adversaries against new potential threats such as China’s J-20 and the Russian PAK FA.

The plane’s innovative bag configuration would have also been valued nowadays. While variants were proposed to replace some of the Navy’s old aircraft, most of these programs were scrapped.

Still, the Gray Ghost had left a mark in military aviation circles. Rumor has it that the design based on the aircraft lives in the covert realm. Moreover, both Northrop and Lockheed have competed many times since then. Both companies may compete again soon to create a replacement for the Raptor.