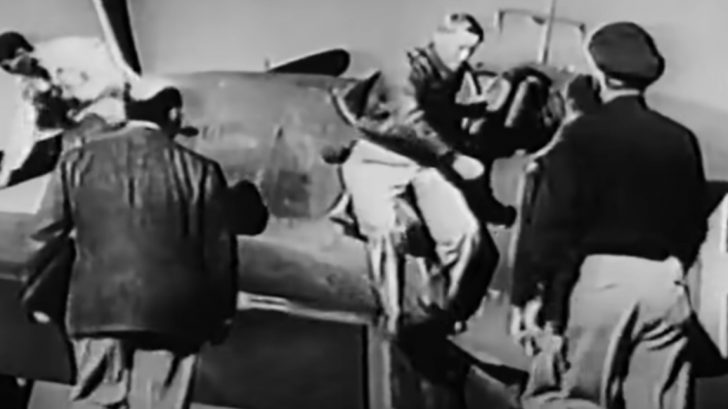 On January 11, 1944, on the way home after bombing a Luftwaffe airplane manufacturer, the US Air Force 401st Bomb Group was attacked by Luftwaffe fighters when flying above the Netherlands.

The P-51 Mustang’s pilot was James Howard, whose bravery and selflessness that day saved many lives. He was the only American P-51 Mustang fighter in the WW2 European theater to be awarded the medal of honor.

Howard was born in China in 1913, but his family relocated to St. Lois when he was young. In 1938, and 25 years old, he was accepted to the US flight training program out of 140 applicants.

Less than a month after the US was pulled into WWII, he was one of the brave pilots to attack the Japanese Aerodome in Thailand and later prevent an attack in Burma.

After shooting down six Japanese planes in 56 missions, he became a Pacific ace. He was later promoted to major and given command of the 356th fighter group based in Essex, England.

He was given the P-51 Mustang, personalized with the emblem Ding Hao, a Mandarin term that means ‘very good.’

However, on their way back, German radars noticed their presence, and they were exposed. A Messerschmitt BF-110 Destroyer approached him, but after shooting it down, he lost communication with his team and was alone.

When he flew back up at bomber altitude, he spotted 30 German fighters nearing his bombers. He could have waited to reassemble his squadron before launching an attack, but for the next 30 minutes, he single-handedly attacked the formation, defending the B-17s by himself.

Howard even managed to shoot down five Luftwaffe fighters. Even when he ran out of ammo and his fuel was dangerously low, he attacked the Germans by bluffing.

When the battle died, he returned to base in England, where he was met with excitement, applause and cheering from the bombing crew.

He was credited with four kills for the day. Both his superiors and fellow pilots were astounded by his bravery.

Soon, hundreds of newspapers began to pick up Howard’s story, making him an overnight sensation. During a press conference a week after the attack, a reporter asked him why he risked his life during the attack, to which he just humbly responded, “I’ve seen my duty, and I’ve done it.”

On June 5, 1944, he received the Medal of Honor as the only US fighter in the European theater to earn this recognition.

Howard soon went back to battle and flew a dozen more missions. He helped plan close air support at the Normandy Landings in June 1944.

He was promoted to colonel the following year and retired from the Air Force in 1966 as Brigadier General.