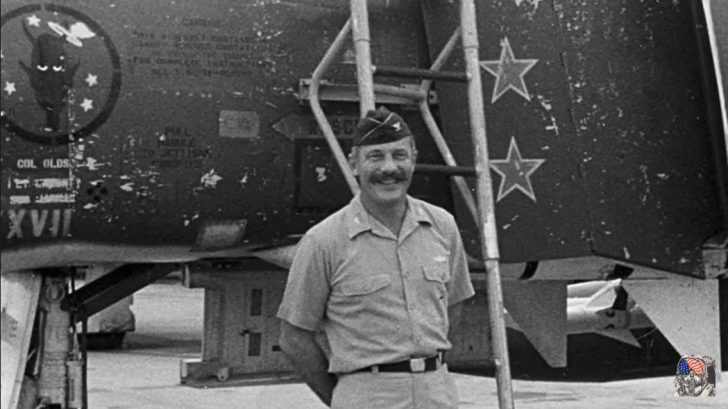 Robin Olds was a legendary American fighter pilot and the United States Air Force general officer. During his stint in WWI, he was known as an aggressive fighter pilot who made a double ace. He was also a dashing pilot hero married to a glamorous Hollywood actress.

Here are the ten facts that made Robin Olds the “Total Fighter Pilot” package:

1. He was born into a military aviation family

His father was an army corps pioneer and an aid to Gen. Billy Mitchell, and he got to ride in a B-24 during his high school years. These early experiences with flying forged his desire to become an army aviator.

2. He attempted to leave school and enlist in the Canadian Air Force

Learning of the outbreak of World War II, Olds tried to join the Canadian air force as they usually recruit younger men. But his father blocked this move, forcing him to stay at Millard.

Robin Olds was an excellent football player. He was named the Lineman of the Year and Player of the Year in 1942. But he also went to flight school in Oklahoma (during summer) and the Stewart Air Base near West Point during his academic year.

4. He was told that he was “too big” for fighter pilots

One of his instructors told him that he was too big for fighters and that he would be flying bombers- a move that didn’t deter the young aspiring pilot. Fortunately, one of the senior instructors he was close with winds up giving him orders to fly in the P-38 community.

5. When Olds gained entrance to World War II, he was quickly promoted to captain in the 434th fighter squadron

By the end of his tour, Robin Olds had successfully flown 107 missions, shot down 13 German planes, and destroyed 11.5 others on the ground. He was also made the acting commanding officer of the 434th fighter group.

7. By the end of WWII, he had 12 confirmed kills making him a double ace

To his P-38 and P-51 wartime squadrons, Olds was known to be an offensive fighter pilot who made a double ace. He also became their commander in nine months.

9. He married a Hollywood movie star

Olds married Hollywood actress Ella Raines after meeting her on a blind date. However, their marriage was somewhat turbulent, marked by extended separations and a clash of lifestyles. They eventually divorced in 1976.

10. Being an ace mattered less to him than leading his men and getting them home safely

The legendary fighter pilot showed this in 1972 when he offered to be demoted to the rank of colonel so he could implement better training and fighting techniques. He sent a report to the chief of staff of the Air Force explaining how the Air Force’s killing ratio fell as the Vietnam War progressed. However, the plan was rejected, and he retired soon afterward.

While known for his bold personality, Robin Olds became a beloved figure in aviation history because of his forward-thinking mindset and his love for his fellow Air Force Pilots.