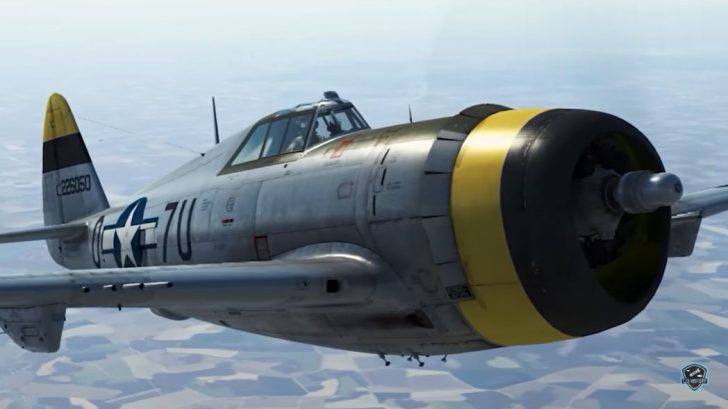 The P-37 Thunderbolt is a deadly ground attack aircraft and one of the most formidable fighters in WWII, with the ability to take heavy beatings from the enemy.

Here are the five things that you never knew about this legendary aircraft:

5. Its first confirmed aerial victory was in the hands of pilot Donald Blakeslee

In April 1943, while flying over Belgium, Blakeslee and his men came across a Luftwaffe squadron made up of BF-109s and Focke-Wulf 190s.

During the engagement, Blakeslee would draw one of the Focke-Wulfs off and pull up behind it. Then, he opened up with a burst, sending it spiraling to the ground, engulfed in flames.

4. It significantly aided American lives in the US

In the small city of Evansville, 6,242 P-47 Thunderbolts were built. The small factories built here gave thousands of locals jobs. The P-47 ultimately helped the town’s financial system, helping its economy during the war.

3. The plane weighed nearly 10,000 pounds when empty but could carry up to 3000 pounds of five-inch rockets or bombs

2. It produced one of the most famous aircraft to date

After taking part in over 90 combat missions, Dottie Mae’s last operation was carried out at the end of the war in Europe, just eight days after the suicide of Hitler.

During an aerial demonstration in an Austrian prison camp to help increase the morale of prisoners awaiting liberation, Lt. Henry Moore flew too low over a nearby lake. The aircraft struck the water.

While Moore escaped the cockpit, successfully swimming to shore, the aircraft sank into the lake. Dottie Mae became the last combat aircraft to be lost during the war in Europe as the Germans would surrender the next day.

1. The P-47 Thunderbolt flew half a million sorties in European and Pacific theaters

In just two years, allied pilots have demolished much of the German supply routes and military lines essential to the war effort.