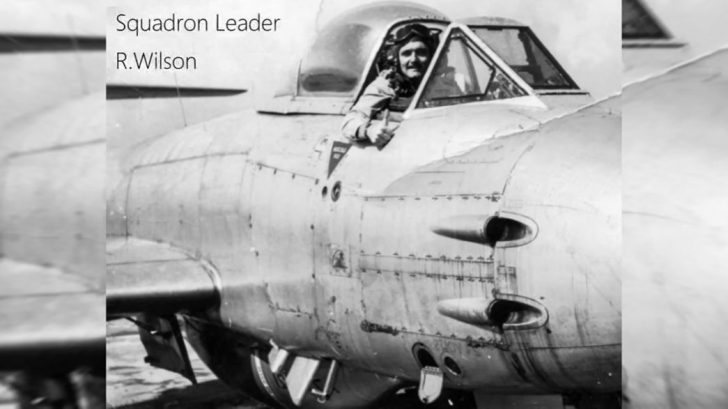 On December 1, 1951, amid the Korean War, a WWII Gloster Meteor, part of the 77 squadrons piloted by RAAF Squadron Leader R. Wilson, who was a WWII veteran, was attacked by Russian MiG-17s.

How did this WWII fighter manage to survive and return home during a fateful encounter during the Korean War?

Gloster Aircraft Company’s most successful design was its twin-engine jet fighter. Initial designs were done around 1940-1941, and the prototype flew in 1943. Production spanned from the latter years of WWII all the way to the mid-1950s.

Wilson’s plane was the Gloster Meteor with tail number A77-15.

His squadron was later attacked by Russian MiG-15 jets. The old WWII plane was terribly outclassed in almost every way. Still, Wilson’s A77-15 bravely engaged in a dogfight with the enemy aircraft.

Despite the dire circumstances, Wilson would score a confirmed air-to-air kill on the superior miG-15. He would later deliver an offensive sweep known as the “MiG-Alley.”

Wilson was severely wounded during the engagement as cannon fragments entered his cockpit. Furthermore, his Meteor would also be left crippled.

By the end of the engagement, his plane would only have half a wing, one aileron, and the landing gears completely destroyed.

Astonishingly, Wilson managed to keep the aircraft airborne. He would even manage to land the Meteor back home at the airbase in Kimpo, North Korea.

Later, upon knowing that his plane was planned to be scrapped, Wilson demanded his plane be repaired. Later, the A77-15 served more missions during the Korean War as a ground attacker.