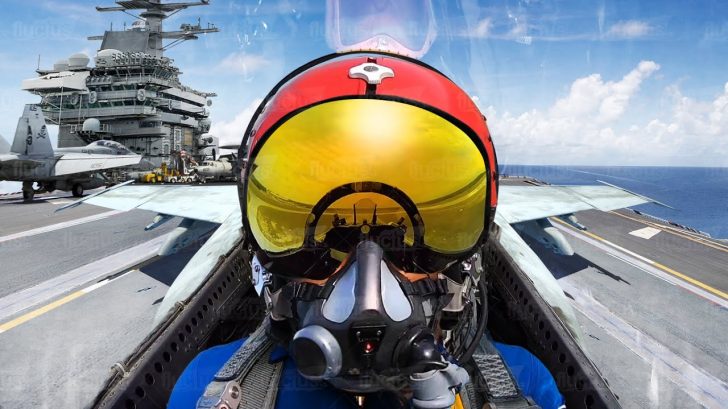 Pre-flight operations always start with briefings. In these meetings, the pilots are fed with intel from the Carrier Intelligence Center. It covers any flight-related information such as the current and forecasted weather and ship position. In addition, they are also told about the critical operations in the area and the recent data from intelligence analysis.

Right after the briefings, the flight crew will perform maintenance on their planes starting by reviewing the aircraft’s discrepancy book. This document provides the crew with a comprehensive and chronological order of flights and maintenance performed on a specific aircraft. It also includes the A-sheet which is an aircraft inspection and acceptance sheet needed for the plane to be flown.

The plane’s weight, fuel, and engine health are checked in this phase. In addition, the crew also checks the catapult if it was set correctly. Finally, the pilot can conduct the pre-flight checks right after checking its general condition and checking the area around the plane for debris and leaking fluid.

Usual cockpit inspections and pre-flight checks can be done while taxiing. The pilot will also follow the flight director meticulously to ensure proper spotting on the catapult. When they are ready, the steam produced by the ship’s reactor fills the catapult’s cylinder enough to launch the plane from 0 to 165 mph in 2 seconds.

If they’re not performing drills or flying their planes, pilots aren’t safe from filing paperwork. Depending on their location, they could only hope to fly once or twice a day – sometimes even none. So on some days, they are doing paperwork and catching up on certain duties.

When distinguished guests are on the carrier, some pilots will be ordered to perform an impromptu airshow. Don’t expect anything extravagant though! It’s hard enough to take off and land on carriers so these pilots aren’t at their fullest capabilities.

Soldiers always need to be prepared for combat and pilots are no exception. In some military exercises, they are put in different scenarios to simulate battle conditions. These exercises can range from scrambling, to fast-roping exercises out of a Sikorsky Seahawk.

An example of a routine drill that everybody in the carrier does is the Foreign Object Debris (FOD) walk. In this drill, the crew is assigned in groups and ordered to walk all over the runway in search of debris. The goal of this is to collect FOD materials while simultaneously raising awareness of the different types of FODs.

Everyone has a part to play when it comes to emergency situations, that’s why routine training exercises are done on board the ship. All sailors are expected to know how to handle hoses for fire emergencies and how to perform first aid.

Working on a carrier can be taxing and stressful with downtime being scarce. If the stars aligned, the crew is allowed to swim near the vessel. This military tradition allows them to enjoy the vast ocean while some have the arduous task of looking out for sharks.