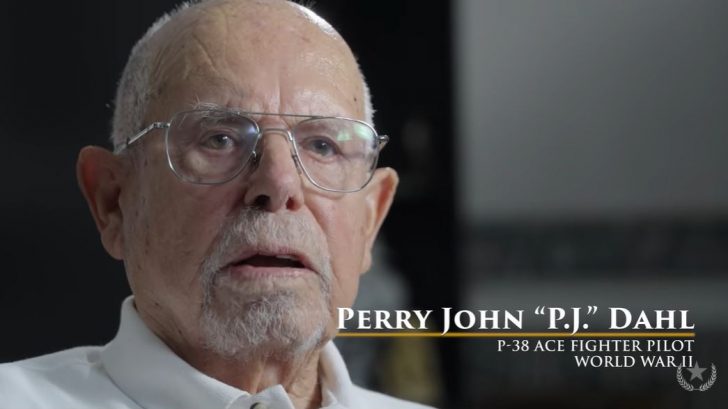 When John “P.J.” Dahl was a kid, he always dreamed about flying. He finally got his chance when he became part of the 41st Infantry Division and

He was truly one of the most legendary pilots of his time. He even shot down his first airplane before he was old enough to drink!

Their primary objective was to run airstrikes against Rabaul. It was also his first kill while at Dobodura over Lae.

On another mission to Lae, Dahl made a crucial mistake. While he punched off his belly tanks right, he forgot to choose internal fuel because of his inexperience. By the time his engine returned to life, he had already lost everyone in his formation. Too embarrassed, he told his leader that he had engine trouble and was told to go home.

On the way back, Dahl saw a Japanese Zero. The Zero immediately launched its .30 cals, hitting the starboard engine, and the coolant started pouring out. Dahl outran the Zero, eventually leaving him alone, thinking he would crash, anyway. Fortunately, even with his plane smoking, Dahl still managed to land with one engine.

In another mission in February 1944, Dahl was off Cape Gloucester driving Japanese troops away when bad weather hit, and they were forced to abandon their mission.

Conditions worsened, and Dahl and his squadron didn’t know if they could safely go back to base. His plane got washed out to sea that day. Fortunately, he got to dry land. That was the first airplane he lost.

During another mission out of Hollandia, while turning the enemy into a fireball, pieces of the plane also damaged Dahl’s P-38, and he climbed away.

When he returned to base, he landed on the left and nose wheels as he skidded to a stop across a revetment. Again, he was unhurt from the encounter.

Dahl found himself leading his squadron to another mission, supporting B-25s bombing Japanese shipping in Ormoc, Leyte. He got into a dogfight with Japanese [Ki-61] Tonys and got into a midair collision. When he checked again, he saw the rearview mirror, and both his tailbones were knocked off. The right engine blew up and bailed out just in time, but he suffered flash burns.

Despite it,  Dahl was able to deploy his life raft and drifted for two days. He also played dead while floating through an enemy convoy. He reached Leyte’s coast on the third day, and found a trail. There, Filipino guerillas who nursed him back to health until he rejoined his unit two months later.

Even at a young age, P.J. Dahl attained ace status while serving in the 475th Fighter Group. He had nine confirmed kills and received plenty of decorations for his service, one of them being the Silver Star for his bravery.