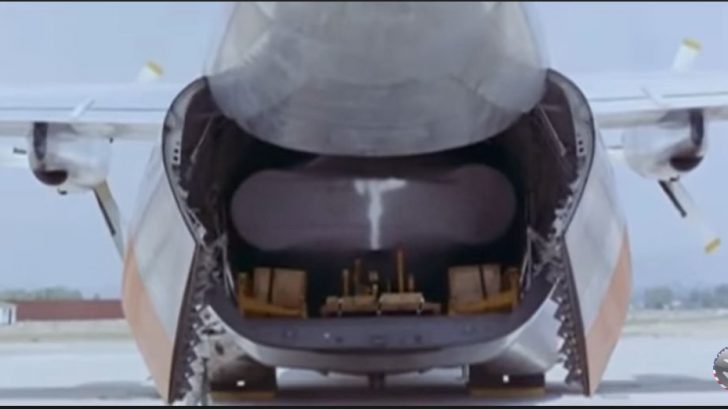 The C-133 is a heavy military cargo aircraft created in the 1950s by Douglas Aircraft. It was the US Air Force’s only turboprop-powered strategic airlifter.

Here are the ten facts about the grandfather of big airlifters:

2. While the C-133 was still under development, the people from Pratt Whitney were already testing their engine in the flying lab based on the B-17

This was rather unusual and unheard of.

4. Its cargo area was considered large for its time

It spans approximately 27 meters, or 90 feet long, and 3.7 meters or 12 feet wide. Despite its size, it was pressurized and heated. One can also access the cargo bay in two ways- one large side door and another huge ramp in the back.

The cargo bay was also tailored to work with practically all the machinery used by the US army, from simple ammunition to tanks and missiles.

5. The fuselage was raised a little in the back section of the aircraft

This was done to free up some space from the tail’s load-carrying structure. This made it possible to work more quickly with the cargo.

6. Unlike its predecessor, the XC-132, the plane wasn’t a double-decker

However, the nose section of the plane was used more optimally than what was previously done before.

On older aircraft, the doors and ramps were found on the front. In the C-133, the nose section had two levels. Down below is used for equipment storage and the nose landing gear. The upper section has the cockpit and a small rest cabin for the crew.

These include two pilots, a navigator, a flight engineer, and a cargo operator.

8. The plane had a tricycle landing gear, just like most airlifters

The nose landing gear has two wheels, all of which are pretty standard for most airlifters.

This is equivalent to 110,000 pounds of cargo, or 200 soldiers. While these figures aren’t too impressive by modern standards, in the 1950s, it was already pretty remarkable.

10. Its capacity to transport rockets was quite valuable for NASA in the 1960s

The Cargomasters took an active role in the Mercury, Gemini, and Apollo programs. The demand rose when NASA sought a transport plane to work with oversized cargo.

For many years, the C-133 was the only plane able to carry massive or heavy cargo. However, it was plagued with severe vibration issues that caused stress corrosion of the airframes, until it was beyond economical operation. The C-5 Galaxy eventually replaced it in the 1970s.