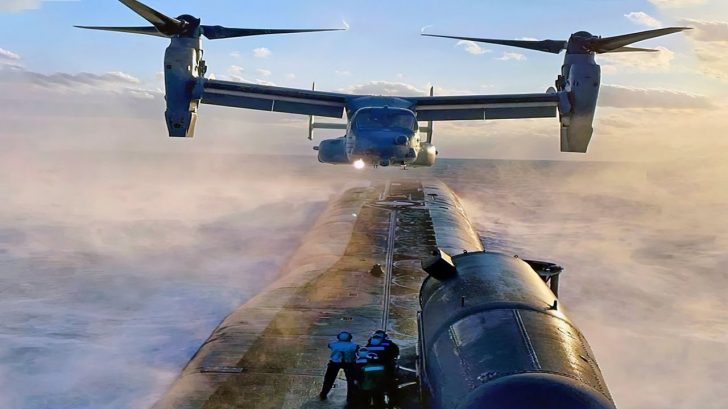 Twitter user, @thenewarea51, posted a picture on April 2022 showing a CV-22 Osprey flying almost on top of an unidentified submarine. Viewers were quick to point out how dangerous this mission must have been with some leading to believe it was an obvious PR move by the Navy.

Deployed in 2006, the CV-22 Osprey is one of the most versatile aircraft the Navy has flown. As a tiltrotor aircraft, it utilizes its VTOL and STOL features in missions that a rotary-wing plane could only dream of doing. Once airborne, its nacelles can tilt into a forward position if needed.

Until now, there’s been no confirmation as to which submarine is seen in the picture. Of course, this didn’t stop the internet from putting pieces together to form a coherent guess. The name of an SSGN ship like the USS Georgia was the consensus pick by many.

Before the picture was posted, the USS Georgia was seen around the waters of Cyprus. The submarine’s crew was performing training exercises for special operations aided by Task Force 612. They did launch and recovery training out of Souda Bay in Greece, ending on April 22.

The Possibilities Are Endless

It isn’t surprising that missions like this are performed in Europe. After all, tensions in the region have been high following Russia’s invasion of Ukraine. It might as well be a training exercise, a covert mission, a show of force, or even maybe a photo-op – we may never know for sure.