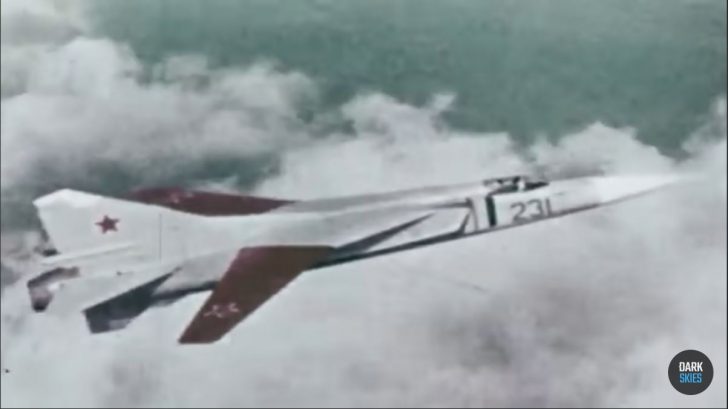 When Lt. Vicktor Belenko’s plane failed to return, the Soviet Air Defense Forces chiefs thought his plane had crashed. Little did they know that his plane, the most Mikoyan-Gurevich MiG-25, one of the most feared planes in the west appeared near the city of Hakodate, and landed on a Japanese runway.

On September 1976, Balenko and his squadron were set to fly east to meet up with Soviet Navy ships that launched target drones so that warplanes could practice their missiles. But Belenko was also planning his own mission.

Belenko who has been a modern citizen his entire life had grown disillusioned with the Soviet regime. He had started questioning whether or not the Americans were as evil as they were portrayed to be. Thus, he planned an escape aboard his MiG-25.

He flew, relying mostly on memory and guesswork, and intended to reach Chitose Air Base. However, low fuel forced him to land on the nearest available runway. After firing warning shots, he made an important announcement, that he wished to defect.

The Most Feared Aircraft In The World

As airport officials finally reached him, they realized that they were dealing with the surrender of the Mikoyan-Gurevich MiG-25, the most feared and secretive aircraft of the Soviet Union.

Introduced in early 1970, the plane was the Soviet’s closely guarded secret. The west’s concern about its design was its large, swept-back wings. The US intelligence also virtually knew nothing about its capabilities- and thought it could be the best dogfighter in the world. Rumors also started surfacing that it had the best state of air radar.

Suddenly presented with this Soviet fighter that could potentially outrun and outperform any from the US Air Force arsenal, it became the most feared aircraft in the world.

Soon, aviation experts that inspected the aircraft found the truth about the mysterious warplane. Its large radar was years behind US models. However, its materials were virtually jam-proof, a feature that wasn’t available on American radars at that time.

Experts soon discovered that when flying 2,000 miles per hour, the wind’s force will be significant, eating parts of the engine itself. Thus, the westerners concluded that the same plane tracked by Israel in 1971 at Mach 3.2 was probably destroying its own engines while showing off. After further study, experts also found out that the MiG-25’s capabilities were wildly overestimated. The most feared aircraft in the world was nothing but a paper tiger.

News of Balenko’s defection reached the Soviet Union in no time. The Russian embassy in Tokyo demanded the aircraft and pilot be returned back. However, the Japanese ignored these requests. Belenko didn’t return to the USSR and was instead given American citizenship.

Once in the US, he became an aeronautical engineer and Air Force consultant. Once the US collected all the information it collected from the MiG-25, it was reassembled and loaded on a boat for its return to Russia. The Russian soon found out that the westerners reverse-engineered all operation equipment.

The US by then launched its biggest and most effective project, the McDonald Douglas F-15 Eagle. This type was built to succeed the MiG-25 in all capacities, including speed and maneuverability. On the other side, the Soviets also took action to improve the MiG-25. Two and a half years later, an improved MiG-25 PD entered production. The red armed forces also subsequently developed the MiG-35 interceptor aircraft.