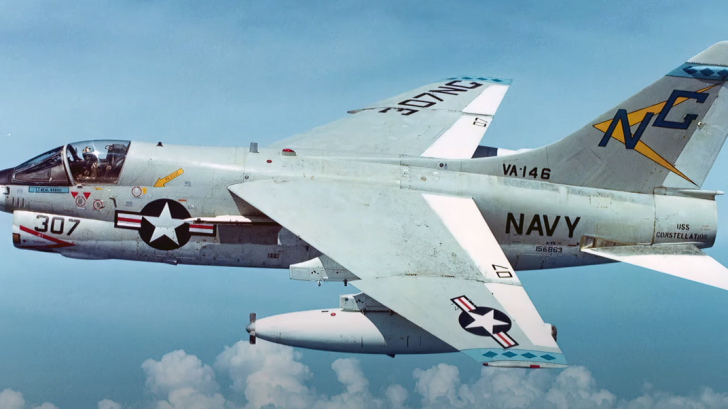 1. Designed For Carrier Use

Vought engineers developed the A-7 mainly for carrier deployment. Because of this requirement, they had to install tail hooks, enforce the airframe, and make the wings foldable for easier storage.

The Vought F-8 Crusader highly influenced its design. But unlike the Crusader, the Corsair II had a shorter fuselage and a longer wingspan but had no variable-incidence feature. A variable-incidence scheme allowed the wing to assume a high angle of attack while reducing the takeoff and landing speeds, keeping the fuselage level, and providing the pilot better visibility.

3. From Supersonic To Subsonic

It may seem counter-productive to convert a supersonic design to a subsonic, but that’s precisely what they did with the A-7. This was done to comply with the Navy’s strict requirements emphasizing cheapness. A subsonic aircraft would have a smaller airframe, leading to easier and cheaper production.

While the Crusader had four Colt Mk 12 autocannons, the A-7 only had one gun. The M61A1 was the gun of choice to accompany the Corsair II during its missions. Its Gatling-style rotary cannon fires 20mm rounds at an impressive rate. The A-7 carried 1,030 rounds of ammo for its main armament.

5. All Kinds Of Ordnance

What it “lacked” in the gun department, it made up for in carrying all types of ordnance. The Corsair II carried Sidewinders most of the time but if needed, it could also carry AGM-45s, AGM-62s, AGM-65s, AGM-88s, and GBU-8s – and those are just the missiles. As for bombs, it used Mark 82s, Mark 80s, Paveways, and a whole lot more nuclear bombs and rockets.

During its service, it was known for its accuracy and precision in delivering ordnance. This achievement can be attributed to its then-superior avionics and the use of Paveway laser-guided bombs. It was also the first US aircraft to use a modern heads-up display made by Marconi-Elliott.

One aspect of its relatively cheap design is its capability to be maintained easily. A dedicated maintenance crew for the A-7 can perform thorough maintenance of the aircraft in just fifteen minutes since its airframe is easily disassembled.

8. Way Ahead of Schedule

By now, we’ve all probably heard our fair share of delayed planes stuck in production or development. However, the Corsair II was actually four weeks ahead of schedule. It first flew on September 26, 1965, and entered service on February 1, 1967.

You might have noticed a peculiar design under its nose. That is the A-7’s nose inlet which was used as a simple solution to feed air into the engine. Even though it was positioned ahead of the landing gear to prevent debris from getting inside, it could still take in air from the carrier’s catapult system.

Both the US Air Force and US Navy retired their Corsair IIs in 1991. This was done to make way for the next generation of fighter planes such as the General Dynamics F-16 and the McDonnell Douglas F/A-18 Hornet.