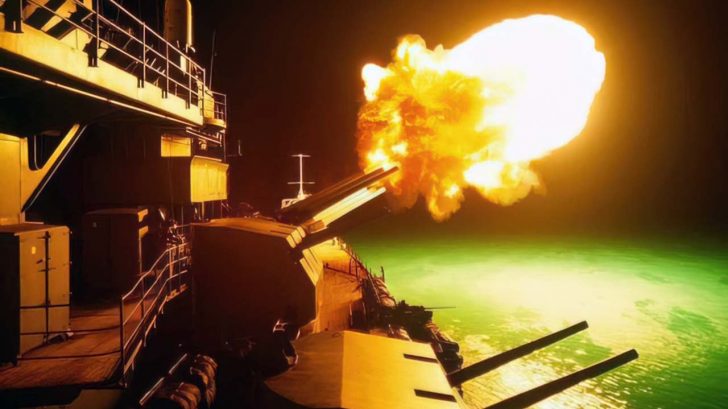 As part of the Reagan administration’s program, USS Wisconsin and Missouri were both reactivated. The two ships were famously used during WWII in the Pacific theater. Back then, Wisconsin shelled enemy fortifications and helped friendly carriers. Meanwhile, Missouri participated in the Battles of Iwo Jima and Okinawa and was the ship used by Japan to sign their official surrender.

USS Missouri underwent modernization in 1984. Her 20mm and 40mm AA guns were deemed obsolete and were removed. Instead, it was equipped with Harpoon anti-ship missiles, Tomahawk cruise missiles, and Phalanx 20mm/76-cal rotary guns for defense. The ship’s radar, fire control systems, and electronic warfare capabilities also saw improvements during this time.

Two years after USS Missouri’s upgrade, USS Wisconsin began a similar procedure. In addition to the upgrades, it was given 8 RQ-2 Pioneer UAVs that helped spot targets for her 16-in guns.

After 40 years, the two ships served together again during Operation Desert Storm. At 1:40 AM on January 17, 1991, USS Missouri fired her first Tomahawk missile. Over the next five days, she would fire 27 more. On the other hand, USS Wisconsin was the Tomahawk land-attack missile strike commander for the Persian Gulf. The ship directed the sequence of missile launches that started Operation Desert Storm, firing 24 Tomahawks in two days.

When the operation was over, the two battleships had delivered over a million pounds of ordnance on enemy targets. USS Wisconsin launched her last salvo on the last gunfire support mission of the war, becoming the last battleship in history to see action. Years later, the battleships were decommissioned and turned into museum ships.