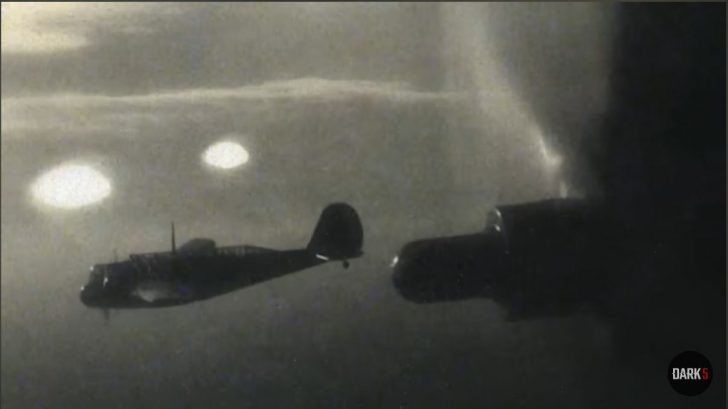 With WWII nearing its end, some Allied pilots spotted flowing colored lights, chasing their every move during a nighttime mission at the French-German border.

Here’s an interesting take about WWII’s most mysterious UFO encounter:

On November 27th, 1944, a flight crew aboard the British-made Bristol Beaufighter was flying over the Rhine Valley on the French-German border when they spotted a strange beam of light in an otherwise dark sky.

The crew claimed to have seen ten bright orange lights flying at higher-than-normal speeds. The light approached them through the aircraft’s left wing.

Initially, they confused it for a German air weapon. But when the plane attempted to pass through it, the light suddenly disappeared into the air.

When their radar failed to register any object, one of the crew, operator Myers, grew puzzled. Upon returning to their base, Myers pulled a Smokey Stover comic strip from his back pocket, slamming it on the desk, and referring to the lights as “Foo Fighters,”- a  non- sensical word used by the characters in the comic strip.

Far From the Last

After the strange incident, the crew decided to keep quiet of the incident, afraid of being mocked by the comrades. However, it wasn’t long before other men in their unit started to experience similar sightings.

According to one of the reports, the crews were followed by lights that blink on and off and changed colors. These lights can come very close, fly formation with the planes, and agitating, and keep the crew on the edge whenever they encounter them, mainly they couldn’t be explained.

One of the most prominent theories about the Foo Fighters was that Nazi Germany was behind the strange phenomenon because all the sightings took place in occupied Europe. Moreover, all sightings stopped when the war ended.

One theory was that it was Germany’s V2-rocket, but one expert refuted the claim, claiming it doesn’t have the maneuverability, it couldn’t turn on a dime and change its acceleration pattern.

Foo Fighters would eventually fall into a pseudoscience category- America’s first real experience with an unidentified flying phenomenon that would go on for decades.