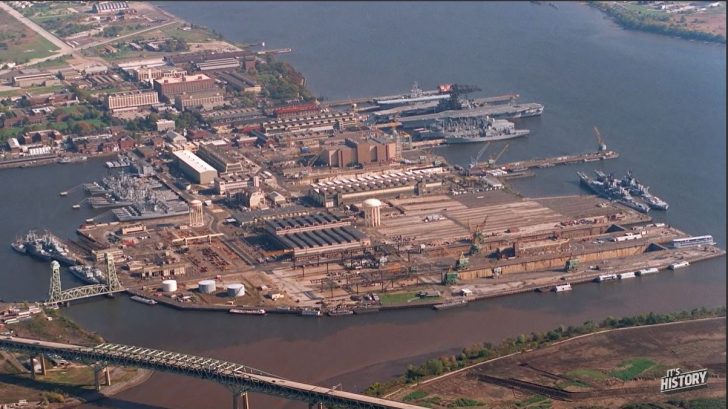 Just outside Philadelphia International Airport is a shipyard that contained old and decrepit ships.

The Philadelphia Naval Shipyard has been a vital naval shipyard for the US for almost two centuries.

It is the resting place of the United States Navy’s most impressive vessels that fought countless wars, and carried fascinating histories.

Here are the actual ships and their service records:

This was the oldest vessel in Philadelphia’s mothball fleet. Barry is a Forest Sherman class destroyer commissioned on September 7, 1956. By 1960, the ship was performing routine operations off the East coast, traveled to Portsmouth, England then to kill in West Germany conducting naval reviews, and importing sonar demonstrations.

The vessel was also the assistant recovery ship for the Gemini 4 space shot, NASA’s Project Gemini’s second crewed space flight. She was initially a museum ship in the Washington Naval Yard before traveling to Philadelphia in one final voyage.

She took part in the Yom Kippur War in 1973, took part in peacekeeping operations in Lebanon, and became a flagship for the Red Sea battle force commander for the Persian Gulf War.

She also took part in Operation Desert Storm, and Desert Shield, and continued to serve in the 21st century in the War on Terror. However, the ship became highly costly to maintain, and in 2007, the Navy decommissioned her.

This ship was initially a guided missile destroyer. However, after it gained flagship capabilities, it became a guided missile cruiser. She took part in peacekeeping operations in Lebanon along with the USS John F. Kennedy.

She also played a key role in the Gulf War, providing air coverage and patrols in Operation Desert Shield. When the 9-11 attacks happened, she was redeployed to the Gulf Coast to support Operation Noble Eagle, preventing suspicious aircraft from entering the continental US. She was finally decommissioned on September 2004.

The USS New Jersey was once the US Navy’s most decorated vessel. Classified as an Iowa class battleship, it was launched a year to the day of the infamous Pearl Harbor attacks.

She took part in several battles for the assault on the Marshall Islands, and performed exceptionally well in the Pacific theater during the war. She also took part in the historic battle of Leyte Gulf in the Philippines, which was the biggest naval battle in history, and continued its service in the Korean and Vietnam Wars.

On February 1991, the USS New Jersey, one of the last battleships in the world entered the mothball fleet for a final time. However, on September 2001, she moved to her current resting place, the Ceremonial Pier on the Camden Waterfront in New Jersey.